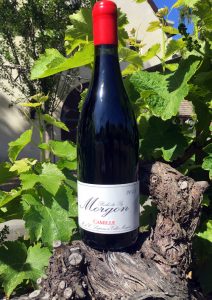 2015 M. & C. Lapierre, Morgon Roche du Py “Cuvee Camille” Cru Beaujolais, France.
Even without their famous father around to guide them, Mathieu and Camille continue to make some of the finest Gamay wines in the world and are some of the natural wine world’s most influential. Marcel Lapierre, who sadly past away a few years ago in 2010, took over the family domaine from his father in 1973, even then he was on the road to becoming a legend, not just in Morgon, one of Beaujolais top Cru villages, but in the greater world of wine, he was guided by Jules Chauvet, who was a winemaker, a researcher, a chemist, and a “viticultural prophet” according to Kermit Lynch, the famed importer, and it was Chauvet that first spoke about natural wine and organic practices in the vineyard as well as shying away for modern techniques and chemical additives, of which Marcel perfected and his methods are a model on which top winemakers are using now, including neighbors like Jean Foillard as well as his son Mathieu, who’s wines are maybe now even better. The Lapierre cuvee Camille, grown on a tiny higher elevation plot, like all their wines is 100% whole cluster with native yeast fermentation and aged in used Burgundy barrel with this 2015 showing off the ripe vintage with forward fruit expressiveness and depth of flavors with lovely perfume and round density, it a wine of richness and substance, but not as quite as exotic or flashy as the famed 2009, though wonderfully close in style and what looks like a classic year. Beautiful sweet raspberry, plum and violets lead the way with sexy deep garnet/ruby hue in the glass adding candied cherry, walnut oil, racy spices and with a light anise note as well as a hint of stems and lingering tart currant. It’s a juicy Gamay no question, being easy to love, but it has subtle earth, thrilling intensity/enegy and a serious side too, with fine tannins and lifting acidity that should see this Morgon Cru Beaujolais, grown on almost pure granite, age well for a decade at least, this is glorious wine.
($44 Est.) 95 Points, grapelive