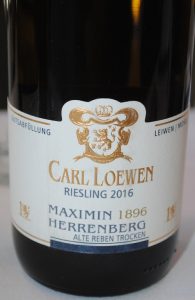 2016 Weingut Carl Loewen, Riesling Trocken, Maximin 1896 Herrenberg Alte Reben, Erste Lage, Mosel Germany.
The follow up to his amazing 2015’s looks set to almost equal them with these 2016’s, proving the quality of the vines here and the rising talent of Christopher Loewen, who’s new set of offerings are brilliant Rieslings, especially his gorgeous dry styles including this Maximin 1896 Herrenberg Alte Reben Trocken Premier Cru (Erste Lage) that has the class and elegance of a Raveneau, but with the slate driven terroir of the Mosel. This wine is a thrilling and vital Riesling with stunning detail, it’s a shimmering pale wine with crisp layers of intensity, showing white peach, unripe apricot, green apple, lime, tangy mango and white cherry fruits. There’s so mush energy here, it’s bursting at the seams, and there liquid mineral steely frame set up the fruit and salty/briny essences along with flinty wet stones, dusty tea spices, light rosewater and lingering verbena and tangerine. I’ll mention again that the 2015’s were richer, more concentrated and exotic, but these 2016’s have more restraint, a slightly lighter bodied and delicacy without giving up much in the way of power and over all substance, plus I am convince after tasting the 2016’s they will age well and continue to impress well into the future. Loewen is now a bonafide star and his wines should not be missed, others of his 2016’s you shouldn’t miss include the Ritsch Grosses Gewachs, the ultra sexy 1896 Longuicher Maximin Herrenberg Feinherb, coming from Germany’s oldest Riesling vines, plus his wonderfully classic Kabinett and Leiwener Laurentiuslay Spatlese! Imported by Terry Theise/Skurnik Wines, Weingut Carl Loewen has joined the Mosel’s elite, do not miss the 2015 and 2016 Rieslings from this address, and in particular this beautiful mouth wateringly dry old vines Maximin Herrenberg 1896 Erste Lage!
($48 Est.) 94+ Points, grapelive