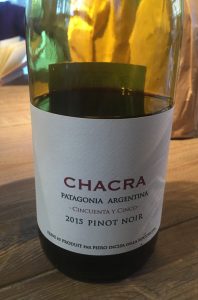 2015 Bodega Chacra, Pinot Noir, Cincuenta y Cinco, Rio Negro, Patagonia, Argentina.
I vastly underestimated this beautiful wine, tasting it blind I admit I was a confused at first, it almost had a Grenache like juicy/feel until it got unwound in the glass. It started slowly, but really opened up nicely with complex partial whole cluster and stems giving spice and floral tones, medium weight, 40% aged in 1 time used French oak, 60% aged in cement tank/vat allowing fruit to shine. Very impressive. Seriously good and unique. 2015 still young, should gain over 3-5 years, certainly looks like a winner. This Bodega Chacra is a bright ruby red hued Pinot Noir that delivers red currant, plum, briar/spices, cinnamon as well as a core of dark/earthy cherry, as well as hints of lavender, rosewater, loamy notes and faint framboise. Piero Incisa della Rocchetta has made a name for himself in the remote Patagonia, crafting intriguing Pinot Noir from biodynamic vines, with this one coming from vines planted in 1955 grown on mainly composed of clay, pebbles, sand, sediments and limestone soils of these glacial planes and ancient river valley. Incisa della Rocchetta, from the family that owns the famed Tenuta San Guido in Tuscany and makes Sassicaia, one of Itlay’s great wines, now lives in New York when he isn’t at Chacra making mostly natural Pinot Noir as well as a tiny amount of old vine Merlot, he created Bodega Chacra after finding this estate in 2004. He, along with Hans Vinding-Diers, the Danish winemaker at nearby Bodega Noemía, first made wine from Treinta y Dos Vineyard, an organic vineyard that dates back to 1932, before adding the Cincuenta y Cinco in 2006, with both site on their own rootstock, since they have not had phylloxera, making for small berried grapes and densely concentrated fruit, allowing him to use a very gentile touch and still have a wonderful depth of flavors. After having many vintages, I continue to marvel at these wines, they are surprisingly clear for unfined and unfiltered wines, with this 2015 Cincuenta y Cinco being one of the most striking and enticing effort to date, drink from 2018 to 2028, a big thank you to Morgan winemaker Sam Smith for sharing this rare gem.
($55 Est.) 93+ Points, grapelive