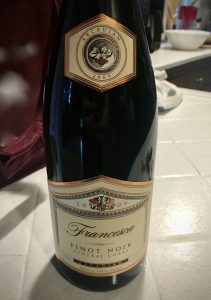 2009 Arcadian, Pinot Noir “Francesca” Central Coast, California.
The impressive and attractive Arcadian Francesca Pinot Noir is Joe Davis’ best limited cuvee, it’s his ultra reserve and this current release is a three barrel cellar selection of three of his favorite sites, the 2009 is a blend mainly from Sierra Madre Vineyard, first planted in 1971, it is at the western edge of the Santa Maria Valley (Santa Barbara County) and is one of the state’s coldest vineyard sites, set of sandy soils, plus I believe Davis used some Sleepy Hollow and Fiddlestix Vineyard(s) here too, it’s a multi-regional wine that celebrates the best of each terroir and the year itself. Davis is one of the most influential winemakers in Monterey, he is one of the legends, having helped put the Santa Lucia Highlands on the map during his years at Dan Lee’s Morgan Winery and he was one of the first to focus on low alcohol and balanced wines, it was also during his years at Morgan, 1986-1994, that he discovered the famous Pisoni Vineyard, using Gary’s grapes in his reserve bottlings. He was also the general manager at Bernardus Winery, as well as starting his own label and focusing on Burgundy styled Pinots and Chards, where he pursued his passions, which led him to move down to Lompoc and join the boom in the Sta. Rita Hills in the late nineties and early two thousands. The Acadian wines, first released in 1996, were a huge hit and received wide praise and I was lucky enough to have been around during these early years, and have been a fan of Joe Davis for a long time, though I have missed out in recent vintages, making it great to hear from Joe and be able to get his latest two wines to sample. Davis has been a fan of the Sleepy Hollow Vineyard even before Talbott bought it and made their main focus and he was able to get selected blocks of Pinot Noir, Chardonnay and Syrah throughout that period, prior to Gallo buying Talbott and taking control of Sleepy Hollow. The Francesca 2009 is wonderfully mature and textured, Davis loves to hold back his releases, sometimes for a decade, and this allows them to show their full personality and elegance, the mouth feel is absolutely gorgeous and the length amazing, this luxurious stuff. Davis goes for traditional methods with his Pinot, employing early picking, whole cluster and keeping the grapes cool and using a long cold soak prior to fermentation which occurs in small open-topped wooden vats, with the grapes being pigeaged (foot treaded) 3 to 5 times daily to further extract color, tannin and richness. The color is remarkably fresh with a deep garnet hue, making you think it is a much younger wine, while the bouquet is full of perfume, spice and beautifully infused with red berries and kirsch notes that leads to a silky medium bodied palate with layers of sweet cherry, poached plum, strawberry coulis and reduced raspberry fruits as well as subtle oak (vanilla), mineral tones, hints of saline, chalky elements along with faint earl grey tea, sandalwood, anise and rose petals. Being able to buy an almost decade old cellar aged Pinot Noir is pretty awesome, especially a wine from pedigreed vineyards, it has ages of life in it, great vibrancy and structure gives this Arcadian Francesca a brilliant lift and even in an opulent year like 2009, making for a serious, vivid and elegant Pinot Noir. Arcadian is, still to some, an under the radar winery, it was a thrill to taste this wine and their 2008 Sleepy Hollow Syrah, which is also a beauty, so I highly recommend check them out!
($75 Est.) 94 Points, grapelive