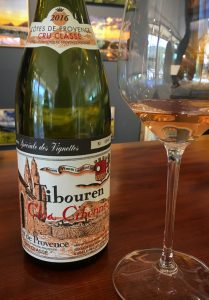 2016 Clos Cibonne, Tibouren, Cotes de Provence Rosé, Cuvee Speciale des Vignettes, Cru Classe, Provence, France.
The intriguingly pale Clos Cibonne, Cotes de Provence Rosé, Cuvee Speciale des Vignettes is made from the winery’s oldest vines, which are 100 plus years, these blocks are mostly consisting of Provence’s ancient red varietal Tibouren, that makes up 90% of this Cuvee Speciale des Vignettes with about 10% Grenache also in the blend. Clos Cibonne is a historic estate that was granted the right to labeled Cru Classe for it’s long heritage in making traditional wines in the region, Clos Cibonne, which draws its name from Jean-Baptiste de Cibon, a captain of Louis XVI’s French Royal navy and first owner of the vineyard buying Château Cibonne. After his death in 1797, the property was sold to the Roux family’s ancestors with André Roux (who passed away in 1989) committing to Tibouren in the 1930’s. The vineyard and winery is located on the Mediterranean Sea, in Provence, which is between Marseille and Nice, not from from Aix in Provence and Cassis. The Roux’s latest generation, the fifth, now Brigitte, and her husband Claude, who took over the vineyard in 2003 continue on in producing some of Provence’s most interesting wines, especially their Tibouren Rosé which has extended lees aging in cask, usually released after an extra year. This 2016 is less concentrated than 2013 or 2015, allowing Tibouren to really show off it’s full charm and pretty character, though still with the exotic mouth feel that it is known for, I am more than happy with it’s vibrancy and delicacy with it’s tart cherry, distilled plum, strawberry and light watermelon fruits as well as it’s dried orange/citrus rind, a touch of kumquat, clove, earthy crisp detail and leesy depth, it’s an absolutely perfect vintage for Clos Cibonne and the old vines do the trick, making for an exceptional Cotes de Provence Rosé that will drink great on it’s own or will be especially compelling with Mediterranean cuisine, it gains power and complexity in each occasion matching it’s environment with grace and poise adding a seductive element to each setting and or food option, this is brilliant stuff, do not miss a chance to enjoy this… Ever.
($26 Est.) 94 Points, grapelive