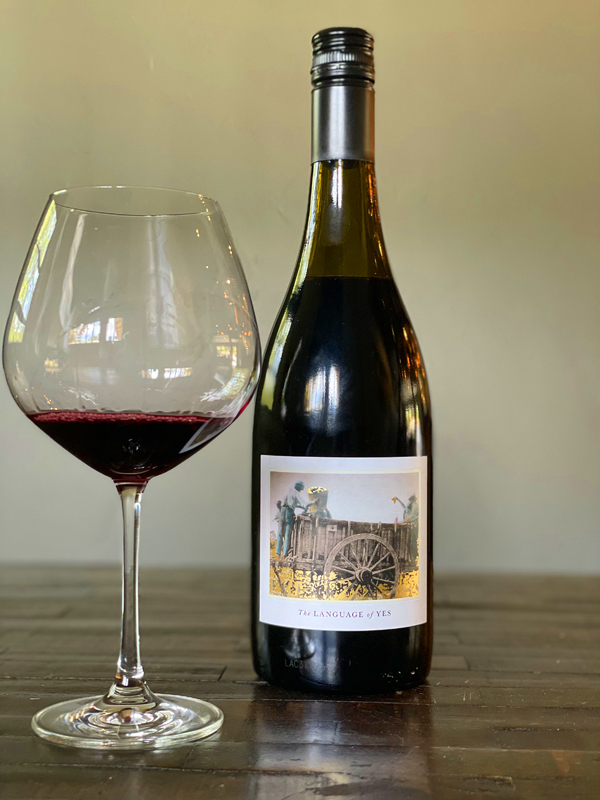 2020 The Language of Yes, Syrah “En Passerillage” Rancho Réal Vineyard, Santa Maria Valley.
The Language of Yes Syrah En Passerillage by Randall Grahm and his team is a lush and opulent wine, which is part of a collaboration between the legendary Grahm, formerly of The Bonny Doon Vineyard fame and a small team from Gallo (Yes that Gallo!), including winemaker Aussie Jane Dunkley, who is also a Master of Wine candidate, and who has worked for Randall in the past. This 2020 vintage, a year that was so disastrous mostly because of the terrible wild fires and smoke, that caused heartbreak across the state, wiping out large and prestigious vineyards entirely, somehow they missed this area when it mattered most, allowing for an exceptional harvest here at Rancho Réal. The beautifully purple and dark En Passerillage starts with wild boysenberry, violets and exotic spices before revealing blueberry, black currant and damson plum fruits on the palate, adding a slight meaty note along with classic pepper, anise, cedar and kirsch accents in a full bodied and aromatic wine that thrills the senses. The Syrah based The Language of Yes, with its dose of co-fermented Viognier, a la Cote-Rotie, also made from the cool climate and sandy loam soils at the Rancho Réal Vineyard in the Santa Maria Valley, where the Grenache is also sourced. The En Passerillage Syrah ended up being 87% Syrah and 13% Viognier in the co-fermented blend, though I believe the Viognier was not air dried as the Syrah was, helping keep natural acidity and lifting the aromatics. It is largely and surprisingly unknown, just how good Randall’s past efforts with Syrah have been, especially his work with the old vines at the Bien Nacido Vineyard “X-Block”, where he made some incredible wines, some of which are still drinking amazing today, like the 2012 and 2014s.

The Language of Yes wines, include three offerings, the Grenache En Passerillage, reviewed earlier here, this sister wine, a Syrah En Passerlllage bottling and the sold out Provence styled Rosé of Cinsault and Tibouren, which I am very excited for a new release that should be out soon. The winemaking for the Syrah, was similar to what they did with their Grenache, in which they adopted the extremely non-standard practice air-drying the grapes post-harvest. The extremely mild climate of the Santa Maria Valley allowed them, as Randall notes, to dry the grapes al fresco in situ, gently placing the grapes on paper trays in the shade of the vine canopy. The intent here, as he continues, was not so much to dehydrate the grapes (this does happen, to the tune of picking up perhaps one additional degree of alcohol), but rather to lignify the stems, in other words, turning them from slightly herbaceous “green” to sturdy, puissant, costaud brown. This is not Amarone, it is about including more stems to must without getting extreme bitterness that green stems give, and this unique process has achieved the desired results, especially with this Syrah En Passerlllage, which gained complex and depth, but still has a supple and luxurious profile. The Language of Yes Syrah saw a three week maceration and primary fermentation with 50% whole cluster with a combination of punch-downs and pump-overs to get full extraction before pressing to used French oak barrels, all over 5 years old, for aging. As with the Grenache bottling, this wine spent about a year maturing before being bottled unfined and unfiltered and again there were about 600 cases produced in this inaugural release. Again, Randall has helped guide a small lot of Syrah, plus a few Viognier grapes from vine to bottle with impressive old world charm and quality, and while the Tibouren/Cinsault was the main reason I signed up for an allocation of Language of Yes, this Syrah has surpassed my expectations and I highly recommend grabbing it while it is still available!
($40 Est.) 94 Points, grapelive