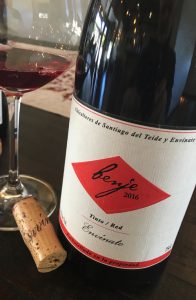 2016 Viticultores Envinate, Tinto “Benje” Ycoden Daute Isora, Tenerife, Canary Islands, Spain.
The Benje Tinto from Envinate is mostly Listan Prieto (Pie Franco) aka The Mission Grape from almost wild untrained vines set on the volcanic soils of Tenerife’s Ycoden Daute Isora region, there is a tiny amount of Tintilla (Graciano) in the blend as well. The Benje Tinto is all destemmed and fermented in concrete vats and well as a few bins from selected parcels that are fermented in separate lots, 100% native yeasts and no sulfur added with only vegetable proteins used to clarify the wine, the wine is racked into small neutral barrels for malos and aging on it’s fine lees, the final blend is about 95% Listan Prieto, 5% Tintilla all of which is organically farmed by hand from old vines, 70-105 years old, that sit at about 1,000-1,200 meters above the Atlantic Ocean, off the west coast of the African mainland. Envinate (Wine Yourself) is a team effort between college friends, lead by Roberto Santana here on Tenerife, but joined by the talents of Laura Ramos, Jose Martinez and Alfonso Torrente, who all have vines around Spain that they collaborate in making small lots from under their group label, and in recent years these young winemakers have been hugely influential in promoting Spain’s new generation of wines, regions and styles, especially highlighting the quality of this historic Listan grape, both Prieto and Negro that was planted from Spain to the new world in the 1,500’s. The Benje Listan Prieto shows a wild plum, tart cherry and dusty raspberry fruit core which is backed up with a saline and savory edginess that is brought into focus with red pepper flakes, dried flowers, flinty/shale mineral infusion and brambly herbs/anise. This 2016 is wonderfully delicate and vital with low alcohol charms, at 12% it feels crisp and vibrant with glorious purity and lightness, much less reduced or earthy that prior vintages, this a lovely wine that gains intensity and perfume with air, while staying firmly brisk in delivery and just the right amount of rustic character, preserving the varietal promise and gripping terroir picking up hints of wild strawberry, sticky lavender and a stony element, absolutely joyous, especially good with a slight chill, drink now.
($30 Est.) 93 Points, grapelive