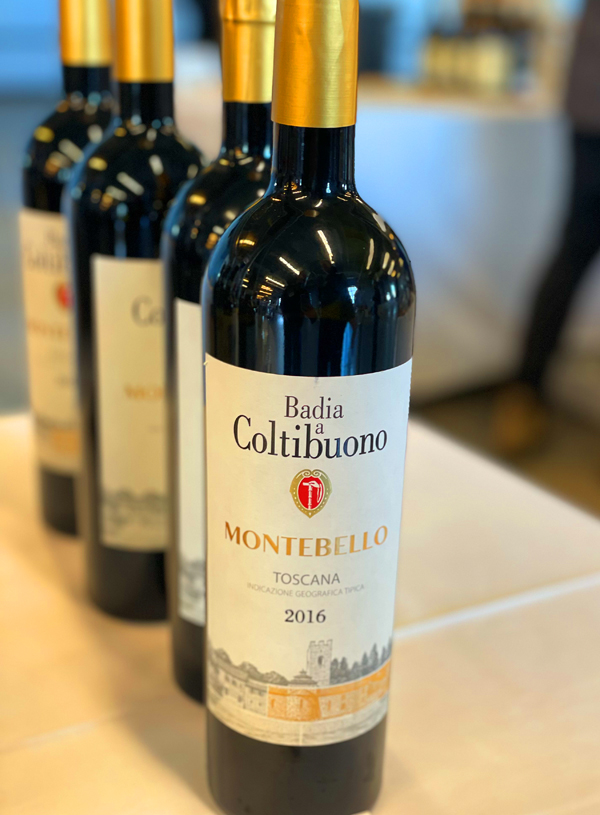 2016 Badia a Coltibuono, Montebello, Toscana IGT Rosso, Italy.
The Gaiole based Badia a Coltibuono, which dates back to 1846, makes some of the Chianti Classico’s most desirable wines and tasting the lineup recently at the 2022 Slow Wine tasting in San Francisco reminded me of how much that I miss Tuscany and how much I enjoy these wines. This 2016 IGT Rosso “Montebello” made by Roberto Stucchi Prinetti, along with consultant Maurizio Castelli really shined on the day, it is an interesting wine, because rather than focusing on Sangiovese (or international varieties), the winery uses a blend of nine of Chianti’s most important indigenous red varieties in equal parts, including Canaiolo Nero, Ciliegiolo, Colorino, Foglia Tonda, Malvasia Nera, Mammolo, Pugnitello, Sanforte and Sangiovese. This dark garnet colored and robust wine shows an earthy intensity and layers of dark berries, plum, currant and cherry fruits, along with tobacco leaf, cedar, minty herbs and a iron note, going some nice floral tones and anise with air. This wine is from a gorgeous vintage and brings an opulent sense and ripe character, making it an intriguing and compelling effort. All the grapes are from sustainable vines set on classic limestone and clay loam soils, that are Organic & Certified Organic. In some ways this wine is a throw back to another age, but done impeccably well and with finessed winemaking, this is not stuff you ever found in the straw basket bottles of the 1970s. Unlike old school field blends, each variety is fermented, with native yeasts, and aged individually in small lots and then blended after a year of barrel aging in a mix of mostly used French wood, with just 10% being new oak. Badia a Coltibuono was originally founded as an abbey (badia) in 1051 by St. Giovanni Gualberto, the founder of the Vallumbrosan Order of Benedictine monks, who may have been the first to cultivate Sangiovese in Chianti and these monks, who were very instrumental in wine growing, helped establish the traditions that have made this estate one of the best known and loved in the region.

The Tuscan sun and hillsides have been looking on the Badia a Coltibuono property for almost a thousand years with winemaking predating the Romans, and while the buildings here now were constructed long after wine was first made on the estate the is evidence that the wine-savvy Etruscans were present here as well. Grape-seeds, tartaric acid residue and amphorae from the first century A.D. Roman period, used for wine production, were found here. An archaeological dig on the estate unearthed ruins from these ancient times, but still, the modern version of Coltibuono is an old estate even by local standards and the vineyards, which are in the Chianti Classico commune of Gaiole in Chianti are led by the fifth generation of the Prinetti family. There are 150 acres of vineyards on the property, along with another 50 acres of olive trees, surrounded by the beautifully forested hillsides. Of course, as the Prinetti’s note, that this being Chianti Classico, Sangiovese is naturally the most important grape variety planted here, though following traditions, they also have Canaiolo Nero, Ciliegiolo, Colorino, Foglia Tonda, Malvasia Nera, Mammolo, Pugnitello, and Sanforte, all native varietals, as well as Trebbiano and Malvasia for their famous Vin Santo dessert wine. Owners, Emanuela, Paolo, and Roberto Stucchi Prinetti, winemaker, really have continued the long history here with lots of respect for nature and look to the future with pride of place and I can say the wines have never been better. While this wine really did captivate me, I must also report that the Sangiovese based wines were beautiful and rewarding as well, with the regular 2019 Badia a Coltibuono Chianti Classico and the 2017 Badia a Coltibuono Chianti Classico Riserva being outstanding examples, both offering immense comfort, complexity and drinking pleasure. This Badia a Coltibuono Montebello IGT Rosso bottling, with about 11% percent of each of the nine local grapes, is a wine that while not within the DOCG Chianti Classico labeling rules, that has plenty of terroir charm, serious fruit density (depth) and the structure to impress, I highly recommend chasing some down.
($60 Est.) 94 Points, grapelive