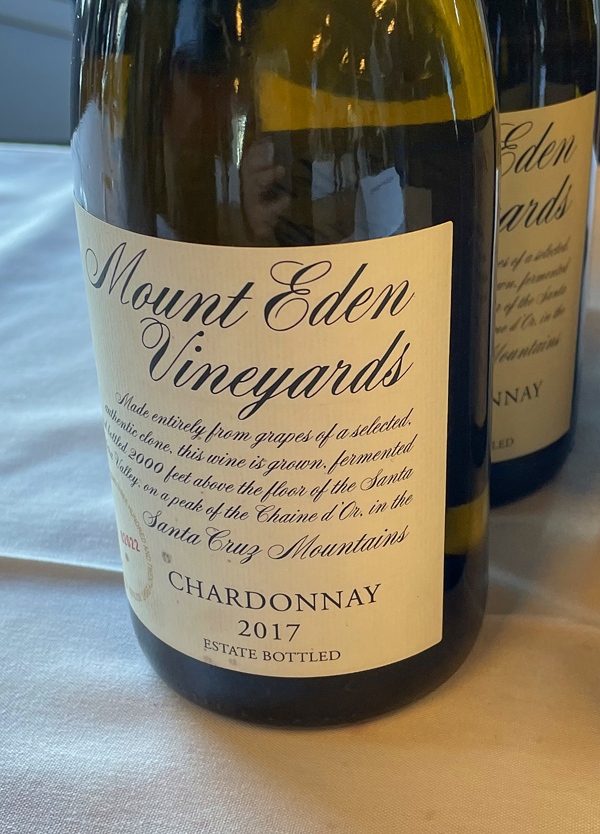 2017 Mount Eden Vineyards, Chardonnay, Estate, Santa Cruz Mountains.
The 2017 Estate Chardonnay by Jeffery Patterson and his team at Mount Eden is everything that expectations had imagined and is a gorgeous full bodied wine with opulence, elegance and hedonism, but still finely detailed, balanced and a reflection of place, it impresses from start to finish and shouldn’t be missed. Over the past couple of years with Covid and general unease, I haven’t had many chances to taste the Mount Eden Vineyard wines, but when I have, I have been rewarded with exceptional efforts and at San Francisco’s Slow Wine tasting I was treated to this beautiful and classic version of their Chardonnay. The nose is stony with subtle orange blossoms, saline and clove spice that leads to the dense mouth filling palate that delivers layers of golden apple, pear and lemon curd that are accented by wet chalk, brioche (leesy notes), golden fig, vanilla and mineral tones. This vintage, which saw a bit of heat, will likely mature a tad faster than the upcoming 2018 and 2019 vintages, but there is still a underlying acidity that keeps things energetic and makes this edition great with a variety of flavorful cuisine, including lobster and thick soft cheeses. Patterson notes that his Chardonnay, which come from unique Burgundy clonal material, is know known as Mount Eden Clone, which has become a California heritage clone. He details the winemaking here as follows, with this Estate Chardonnay, the grapes get harvested when slightly yellow to yellow-green and are pressed without crushing. All of the juice is barrel-fermented in new and one-year-old French Burgundy barrels, where the wine undergoes primary and full malolactic fermentation and sees an elevage on the lees lasting for close to ten months before being lightly filtered prior to bottling. Patterson likes to give his wines time to mature and fill out, so his Estate Chardonnay is rested in Mount Eden’s cellar for two solid years before being released into the wild. As I have said before, we all benefit from that dedication to quality, with the later release of these wines, we get stunning more evolved bottles.

Mount Eden’s winery and vines, as I’ve written before, sit about 2,000 feet up above what is now Silicon Valley, it was originally founded as the Martin Ray Estate back in the mid 1940s and over the following 20 plus years became known for exceptional Chards and Pinots. In 1970 Ray lost the property to an investor coup and in 1972 it became Mount Eden, and they hired Pinot guru Richard Graff who had founded Chalone, who crafted the legendary 1972 and 1973 vintages before the owners brought on the little known woman winemaker Merry Edwards, who is now a California legend! In the more modern era of Mount Eden Vineyards Jeffrey Patterson, a traditional winegrower (vigneron) has made the estate one of California’s absolute best labels, after he was originally hired as the assistant winemaker back in 1981. Having graduated in biology from UC Berkeley in 1975, Patterson was fortunate to have been in Berkeley in the 1970s when local food and wine in the Bay Area were becoming relevant with the likes of Alice Waters creating a huge buzz. This is when she opened the famed Chez Panisse and Kermit Lynch had just started bringing in some of the great undiscovered wines of France, and the public were getting their first chance to explore French cuisine as well as have it paired with famous old world wines, all of which inspired and helped form Patterson’s future approach to his wines. There is so the admire in the latest releases from Mount Eden, with their 2017 Estate Pinot and 2016 Cabernet, which I reviewed recently, being fantastic examples of terroir and varietal. For those that love elite California Chardonnay, like Kongsgaard, Hanzell, Stony Hill, Aubert and Peter Michael, will want to get this Mount Eden Vineyards Estate Chardonnay, which remains a fabulous value for what you get. There’s a good reason why Mount Eden is one of the most celebrated and cherished small boutique wineries in California, making their world class estate Pinot Noir, this Chardonnay and the Cabernet Sauvignon from this hillside estate. Jeffery along with his wife Ellie have made Mount Eden an iconic producer and have influenced many wineries and winemakers, their wines speak for themselves.
($65 Est.) 95 Points, grapelive