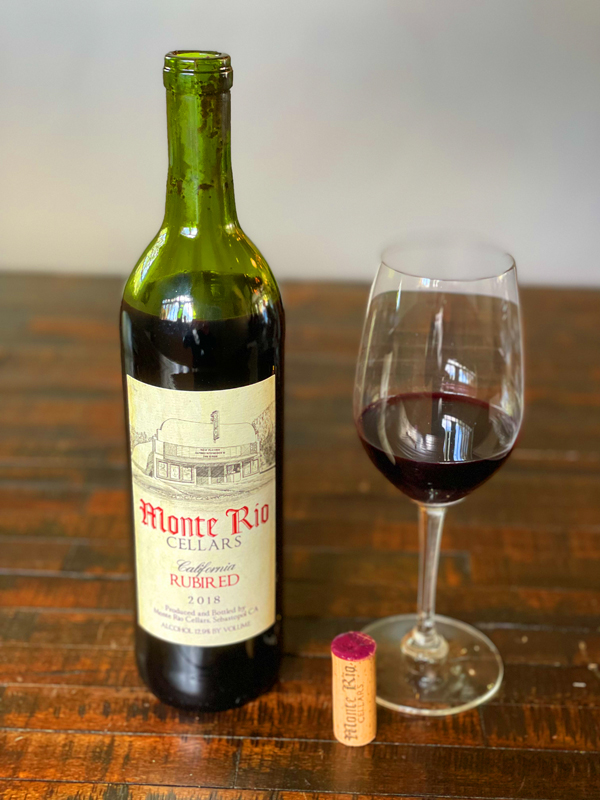 2018 Monte Rio Cellars, Rubired, Central Valley, California.
The Monte Rio Rubired is a no oak dark and intensely grapey red wine, seriously opaque, almost purple/black in the glass with a spicy floral nose and a full bodied palate of tangy concord grape like flavors with black plum, blueberry and marionberry fruits. The wine gains depth and savory complexity as it gets air, it reminds me a bit of Envinate’s Alicante Bouschet based “Albahra” from the south of Spain, and or a Saperavi from Georgia, with an array of spices, anise and stemmy/earthy crunch that nicely cuts into the primary fruit. Rubired is a hybrid grape developed at UC-Davis in the 1950’s. It is a cross between Alicante Ganzin and Tinta Cao, a Port grape, created by Dr Harold Olmo in 1958. Due to its relationship to Alicante Bouschet, it produces a dark red/purple juice which is used to add color in many jug wines. Like Ruby Cabernet, a crossing between the vitis vinifera (noble wine grapes) varieties Cabernet Sauvignon and Carignan that was first trialed by Dr. Olmo in 1936 before being released in 1948, Rubired was bred to produce significant yields in hot climates, and in the California Central Valley it regularly yields 8 to 10 tons per acre. However, Rubired is a teinturier variety with red flesh and pigmented juice. Most red wine grapes have clear juice, the red color of wines coming from extraction of pigment from the grape skins. Rubired, I understand, was originally intended for producing fortified port-style wines, and since the late 20th century, producers in Australia have included it in some port-style blends. Its intensely dark color is often useful in blending to intensify the color of other red wines, which is common in California, but it can also be used to create single varietal wines, like this one. Interestingly, Olmo created many hybrids or Frankenstein grapes, some more successful than others, from Emerald Riesling, a cross of Riesling and Muscadelle, plus a few version of crossing of Carignan, Cabernet Sauvignon or a Cabernet/Grenache (cross like Marselan) and the Symphony grape, which is a crossing of Muscat of Alexandria and Grenache Gris, which is used by Theopolis Vineyards to make a fruity off dry white wine.

Patrick Cappiello, a famous Sommelier and restaurant owner, says Rubired, an inky dense hybrid, has been an obsession of his since he first tasted it in a blind tasting almost 5 years ago now. He goes on to thank Pax Mahle, the winemaker, for his diligent searching that finally found a vineyard owner in the Central Valley that allowed them to send a team in to hand harvest (this grape is almost always machine harvested and de-stemmed) the vines and get enough grapes to make this one of kind single varietal bottling. The sustainably farmed grapes were, as mentioned, hand harvested and left in whole bunches with Patrick and Pax employing a natural full carbonic maceration for this 2018 version. The fermentation and aging all happened in stainless steel, where it aged on the lees for 6 months. This clean, ripe and pure example of Rubired finished at 12.9 % natural alcohol making it a nicely dry and flavorful wine. As mentioned here and in prior reviews, Monte Rio Cellars is owned by Patrick Cappiello, who along with his friend and famed Syrah maker Pax Mahle produce a series of ultra small production, hand crafted and naturally made wines under this rebel label. Most of which are a collection of Zinfandels, one of which is labeled Primitivio, though they have started exploring other and or rare varietals, including this Rubired, a bottling of the Mission grape (also known as Pais or Listen), Petite Sirah, Sauvignon Blanc, Chardonnay and Sangiovese, plus a couple of blended wines as well as some light sparkling wines called Piquette. This Monte Rio Rubired, like hybirds can be, is at first simple, but really grew on me, it would be great with pizza, and I would certainly buy it again, it offers a very distinct and quaffable experience, especially the teeth staining color and attractive aromatics. These latest releases from Cappiello are pretty big steps up in terms of quality, helped by some fine vintages, and the no pretense and natural style. The other thing is, these Monte Rio wines are ridiculously under-priced, in fact this wine is now offered (on sale) at almost half the release price, making it a steal! I highly recommend visiting their website and joining the mailing list, you get a lot for your money.
($18 Est.) 90 Points, grapelive