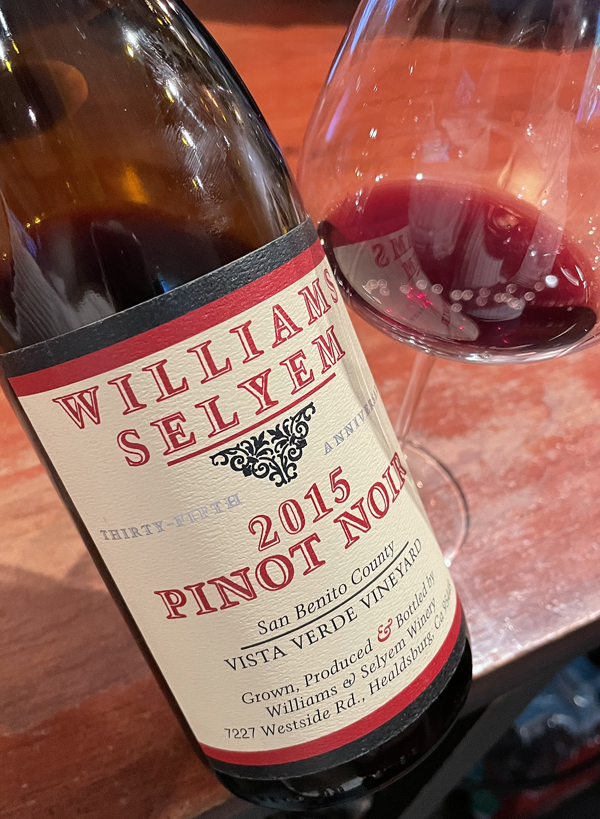 2015 Williams Selyem, Pinot Noir, Thirty-Fifth Anniversary Vintage, Vista Verde Vineyard, San Benito County.
One of the first post Bob Cabral era wines from Williams Selyem, the 2015 vintage, which was the winery’s 35th Anniversary release, was highly anticipated by Pinot lovers and fans to see where this iconic producer’s wines were headed and if this Vista Verde Vineyard, from the wilds of San Benito County, not far from the famed Calera winery and Mt. Harlan, is anything to go by, there is good times ahead here. This gorgeous dark ruby Pinot Noir has beautiful fruit and a sensual textural quality with ripe flavors and surprising depth with layers of black cherry, earthy vine picked berries, plum and red currant fruits, a light touch of oak and a rustic charm that is sometimes missing in modern wines. The satiny medium bodied, but richly detailed Vista Verde adds dimension with air helping give it more presence in the mouth and adds floral tones, a dusty/stony saline note and lingers with burnt orange and kirschwasser. This bottling, sometimes declassified to Central Coast, can sometimes pull off a surprise, and this 2015 certainly does, drinking on equal terms, with pleasure and personality, to some of the more famous vineyard sites in the Russian River, Sonoma Coast, Yorkville Highlands and the Anderson Valley, quite impressive for a warm year too! One of California’s most famous Pinot producers since 1980, Williams Selyem, made legendary by Bert Williams and later by Bob Cabral, still makes lustful wines, from their cellars almost across the road from Rochioli on Westside Road a stones throw from Healdsburg in the Russian River Valley.

The Vista Verde Vineyard, an ex cattle ranch near the town of Hollister, is planted to a mix of Pinot Noir selections, including heritage David Bruce, Pommard and Calera as well as some modern Dijon clones set at between 700 and 1,000 feet above sea level with a under pinning of fractured limestone with gravelly loams over the top. The climate sees big day to night temperature swings as well as coastal breezes, making for a more suitable terroir for Pinot Noir that one would expect and in combination with the soils this place consistently provides complexity and intensity. The winery says, this area, near the small town of Tres Pinos, directly east of the better-known Monterey County, on the other side of the Gavilan Mountains, in San Benito County, which is one of the oldest growing regions in the central coast, boasts four recognized AVAs with La Cienega Valley, Paicines, Lime Kiln Valley and the famed Mt. Harlan. This area, boasts, like Chalone, lots of limestone, with a complex maze of mountains, canyons and valleys, as Williams Selyem notes, some of which run east-west rather than north-south, this channels substantial marine influence into San Benito from the Pacific Ocean, only 20-30 miles away, which gives the freshness in the wines. As per normal here, the Vista Verde Pinot was de-stemmed and fermented in small lots then aged for close to 16 months in French oak with about 50 to 60% new wood. It seems that the Williams Selyem wines have a touch more maceration and pigment than the prior bottlings, but that could be my imagination, either way the 2015 Vista Verde is impeccably well made and utterly delicious, just starting to reveal its full potential, it is a sleeper in the lineup!
($56 to 70 Est.) 94 Points, grapelive