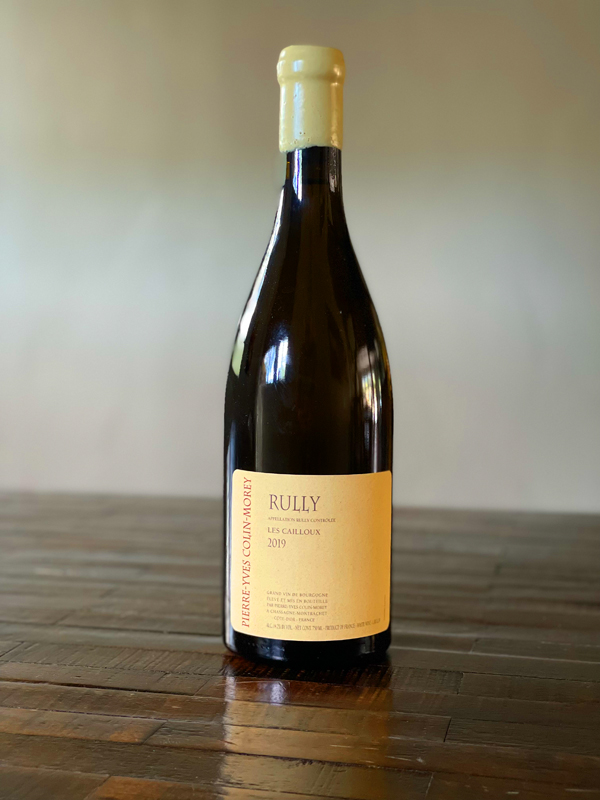 2019 Domaine Pierre-Yves Colin-Morey, Rully Blanc “Les Cailloux” White Burgundy, France.
This pale straw colored 2019 Rully Les Cailloux white Burgundy is pulsating with energy and its zesty acidity heightens the experience behind the beautiful round texture, this is performing well above its price point with crystalline precision. The palate has classic yellow fruits and mineral core with bright lemon, apple, Bosc pear and quince fruits perfectly accented by wet stones, hazelnut, bread dough, clove and subtle oak toastiness. Some of my first loves in Chardonnay came from Rully and the lesser known parts of the Cote de Beaune, which were much more affordable than the prestigious Crus, but Pierre-Yves Colin-Morey has taken his Saint-Aubin bottlings and Rully to unheard of heights, I mean this example could easily be mistaken for a big ticket wine from Puligny or Meursault! I opened this with a piece of fresh caught Monterey Bay salmon that was lightly smoked and the combination was absolutely magic, it left my friends who are not wine savvy utterly speechless, which was quite something. Being a fan of PYCM, this wine exceeded my lofty expectations and I’m so glad I got my hands on a few bottles of it! The Colin family has some fabulous plots in some of the Cote de Beaune’s best vineyards, from Chassagne to Batard (Montrachet), and Pierre-Yves added some high quality vineyards to his own portfolio, expanding into the Cote de Nuits and father north to the Côte Chalonnaise, where this wine was born.

Pierre-Yves Colin-Morey, one of Burgundy’s biggest stars, follows a strict protocol and method, using all sustainable and hand tended vineyards, with mostly organic practices in the vineyards, while in the cellar he ferments and ages his wines in barrel, with early picks being the norm, using indigenous yeasts and somewhat notably, he prefers larger format 350L French oak demi-muids instead of the classic 228L barriques, with his Lieu-Dit and Premier Crus seeing close to 30% new if not more, adding just the right amount of toasty accents. The grapes come from a parcel of vines in the northern part of the Côte Chalonnaise where light and sandy soils and climate promote mineral intensity and vivid acidity, giving this wine its charm and cool toned personality.This Rully is wonderfully balanced and seriously fantastic stuff to enjoy over the next 5 to 10 years, though not many, including myself obviously, will have that kind of patience! Pierre-Yves Colin-Morey is one of famous Colin clan with his father and his brothers all being highly regarded vignerons, but these days Pierre-Yves is probably the most revered and along with his wife Caroline Morey of the equally famous Morey family are a true power couple in the Cote d’Or. Now they are based in their new modern winery in Chassagne where they turn out some of the most sought after wines in the Cote de Beaune. These latest 2019 vintage wines at PYCM are impeccably made and crystalline in focus, and it has never been a better time to stock up on Pierre-Yves’ wines, if you can find them.
($50 Est.) 94 Points, grapelive