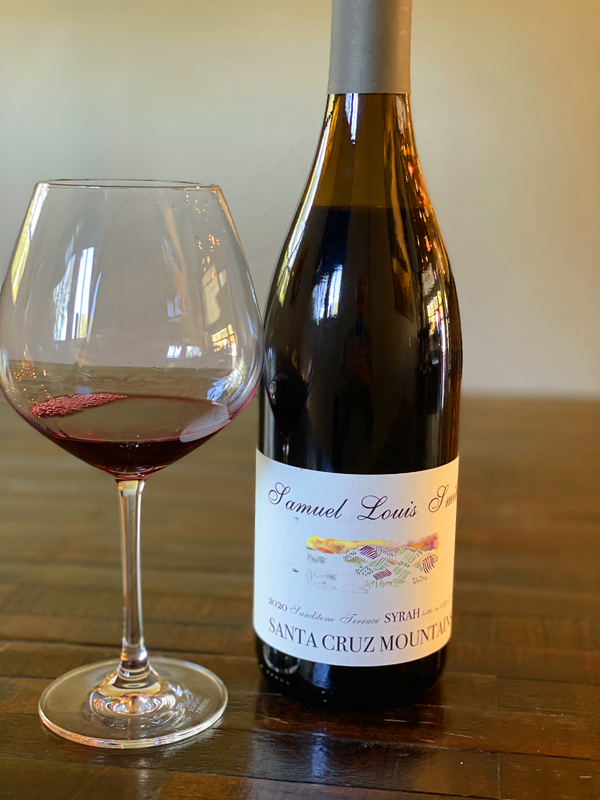 2020 Samuel Louis Smith, Syrah, Sandstone Terrace, Santa Cruz Mountains.
The grippy and stony Samuel Louis Smith 2020 Sandstone Terrace Syrah has terrific length and substance with loads of Olallieberry, blueberry and damson plum fruit to go with a meaty and savory cool climate personality, opening up with Northern Rhone like violets, graphite, mixed spices and zesty natural acidity thanks to the near by Pacific Ocean. Only one barrel of this impressive deeply purple/ruby colored and intense Syrah was made and it should prove quite rare, but I couldn’t resist popping the cork, as I am a huge admirer of winemaker Sam Smith’s personal wines, as well as his work at Monterey’s classic Morgan Winery, where he is the head winemaker. Influenced by his visits to France and the Northern Rhone, Sam has become especially gifted with Chardonnay, Pinot Noir and Syrah, as it shows here in his latest efforts, including this one from the southern part, the more marine affected, of the Santa Cruz Mountains. There’s a lot to unpack here and there’s certainly more to come with age, but this is already delicious stuff with contrast of ripe fruit, firm tannins and earthy tones, plus a health crunchy quality from the 85% whole cluster fermentation and stem inclusion here. Smith fermented with native yeasts and cold macerated this Syrah, allowing for good extraction and employed hand punch downs before pressing to the single neutral French barrique for 10 months. These Samuel Louis Smith Syrahs are sensational wines and attractive values, they really fill out this excellent small lot collection and while the Pinots here get a lot of attention, I must admit Smith’s Spear Started Rita Hills Chardonnay is one of my absolute favorites, it should not be missed.

Sam Smith’s Sandstone Terrace Syrah is usually a blend of Santa Cruz Mountains sites, but because of the fires, the 2020 version is 100% from the Gali Vineyard. Gali is located in the Corralitos sub-district of the southern Santa Cruz Mountains, mostly known for excellent Pinot grapes. It sits at lower elevation, about 400 feet above sea level and approximately six miles from the ocean, with Smith saying that Gali is one of the coolest sites in his lineup. The soils here, as Sam notes, are clay loam weathered from sandstone and shale, which were formed on ancient submarine terraces, hence the name. Though Gali is not farmed completely organic, no herbicides or harsh chemicals are used here and watering is quite minimal, making for small yields. As this Cornas like edition of Sandstone Terrace, which is less creamy and fruity than the 2019 was, unwinds slowly in the glass you get more interesting layers showing through with creme de cassis and peppercorns leading the way along with dried lavender, a hint of espresso grounds and tapenade. These elements to go along nicely with the echos of the mentioned initial flavors and florals, making for a riveting and raw experience that is best enjoyed with meat and or wild mushroom dishes. Smith’s efforts with Morgan are more polished and maybe more crowd pleasing, but they are no less serious, though this tiny hand crafted personal efforts are stunning wines with their own seductive and sultry charms. Like his wines, Smith doesn’t lack for confidence and his talents have made him one of the top guns of his generation, these 2018, 2019 and 2020 vintages have been awesome and I highly recommend getting on his mailing list as soon as possible. Smith is part of an exciting group of young winemakers that are taking California to the next level and there is even more to come, watch this label.
($36 Est.) 94 Points, grapelive