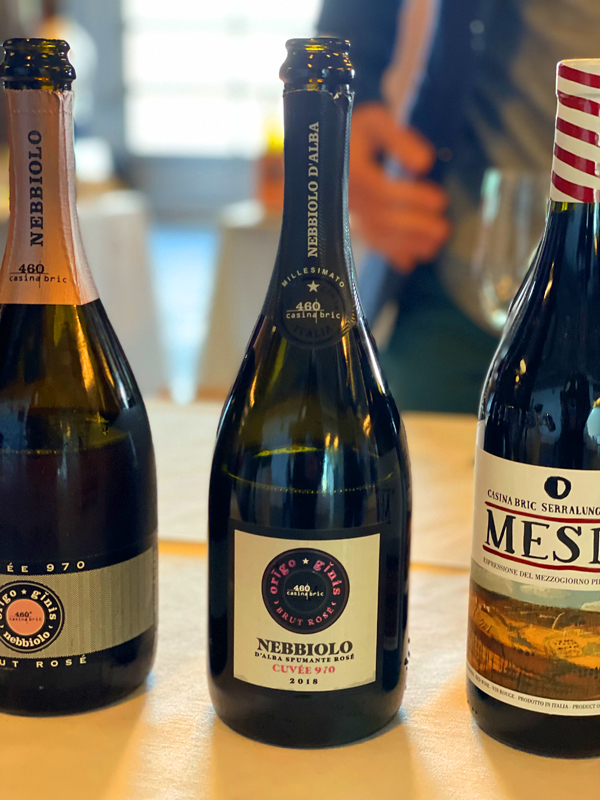 2018 460 Casina Bric, Nebbiolo d’Alba Spumante Rosé, Cuvée 970, Piedmonte, Italy.
Perfect for this time of year, the stylish vintage Sparkling Nebbiolo from 460 Cacina Bric is elegant and impeccably crafted with a mix of of citrus, stony notes and light berry red fruits on the palate the Cuvée 970 is 100% Nebbiolo and it shows with the fine details with hints of rosewater, anise, sultry earthiness and a hint of iron/mineral. The mouse is vibrant, but nicely refined, almost caressing in the mouth while still having an underlying energy, it is both luxurious and refreshing, helping cleanse the palate and causing a nice mouth watering reflex, making it very compliant with a range of cuisine options. 460 Casina Bric sur lie aged this Nebbiolo d’Alba Spumante for between 8 to 10 months in pressurized stainless steel and then in bottle for another year in what is known as the Martinotti method in these parts. This bubbly and salmon/pink hued wine is a great aperitif and or a unique celebratory bottle that offers loads of distinction and has the presence in the glass to draw your interest and let you know this is something beyond the ordinary. A big thank you to Jason Chieti of Siena Imports, who has began importing these 460 Casina Bric wines, known for Barolo, for introducing to them at the Slow Wine tasting in San Francisco and I can’t wait to try the rest of their lineup.

Casina Bric wines are mostly all from Barolo vineyards in the Langhe, and are the dream of Gianluca Viberti, the winemaker and grower at this small and modern estate, that focuses on a collection of Nebbiolo wines, including their signature Bricco Delle Viole cru Barolo, which was all new to me before discovering their sparkling wines. At 460 meters above sea level, Casina Bric (which in the Piemontese dialect means “hilltop farm”) is one of or is the highest altitude Barolo estate in the Langhe region, hence the name, and has a prestigious selection of top notch vineyard parcels mainly in the Serralunga zone. While Gianluca Viberti’s family has been tending their Nebbiolo vines in Vergne, a tiny village in the commune of Barolo, since 1923, Viberti only started this label in 2010, and though not an overnight success, he has created a buzz with his intriguing collection of wines. Viberti does a couple of versions of his sparkling wines with some being Charmat (tank raised) method Spumante as well as the finer tank or bottle and lees aged and conditioned versions, as this one is done. This wine saw a soft pressing of whole grapes without de-stemming, after which it went through an off-the-skins fermentation that lasted close to 20 days in controlled temperature vats. The 460 Casina Bric vineyards are set on Tortonian clay soils with the classic sand and marls, which gives a richer character, while the elevation gives a cooler sense of fruit and balance in the Barolo here, which I hope to test soon.
($30 Est.) 91 Points, grapelive