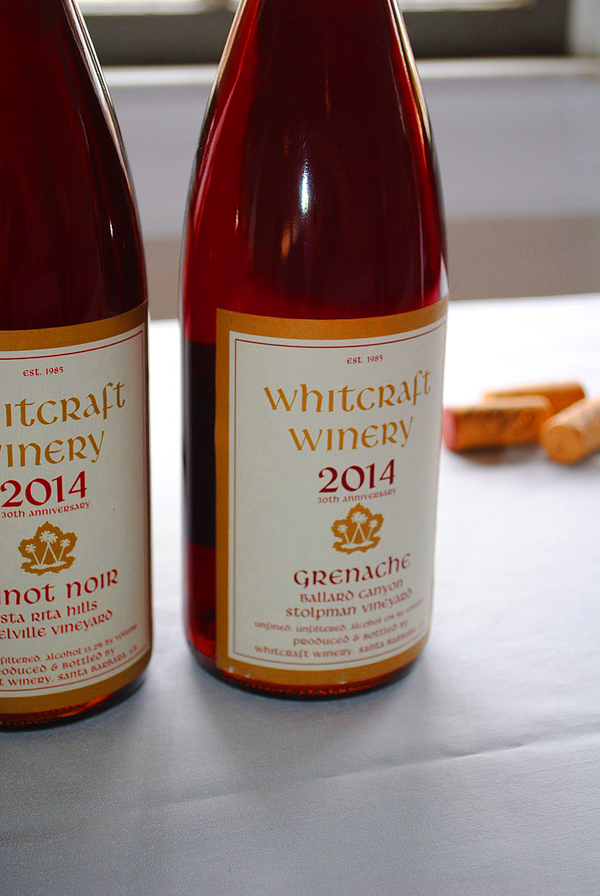 2014 Whitcraft Winery, Grenache, Stolpman Vineyard, Ballard Canyon AVA, Santa Ynez Valley.
Originally tasted on release in 2016, Drake Whitcraft’s 2014 Stolpman Vineyard Grenache is aging awesomely with some secondary and tertiary elements adding depth and complexity here, while the palate is still lively with Italian cherry, plum, red currant, pomegranate and wild raspberry fruits on the silky and spiced medium bodied palate that feels very Pinot like. Whitcraft, while maybe best known for stylish and individual Pinot Noir, does one of California’s most desirable Grenache wines, as well as some other rare varietals, including Trousseau and Gamay, which he does in a lighter and transparent fashion, as this vintage shows. I remember loving this Grenache and Drake’s Pence Ranch Pommard Clone Pinot, so it was a thrill to taste it again with the age on it. The color is a light ruby and the nose has dried florals, herbs and baked raspberry, with hints of pepper, lavender, porcini and fennel coming through in the glass with divine delicacy and a subtle earthiness, making for a lovely and unique example of Grenache that Drake has made his own. Over the years, winemaker Drake Whitcraft, has honed his methods and this wine is now crafted with the whole bunches that are gently foot-trodden and then see a semi-carbonic maceration that is kicked off by a pied de cuvée (vineyard yeasts) and mainly all free run juice to avoid bitter phenolics and tannins. This is very quaffable stuff and highlights the quality fruit coming off the Stolpman vines, which have a top notch pedigree. The Stolpman vineyard in the Ballard Canyon AVA, set on sandy limestone hillsides, is farmed with organic techniques and regenerative viticulture, which Drake says, involves building the soil by adding organic matter to promote a healthy ecosystem.

Whitcraft Winery has been handcrafting and, as the winery notes, unadulterated wines in Santa Barbara, California since 1985, originally with Chris Whitcraft as the winemaker and now with his son Drake making the wines, after his dad passed unexpectedly in June of 2014, just before the harvest of this wine. Chris himself was influenced by some legends, with the winery explaining that he learned his craft from some of the best winemakers in California, including Joe Heitz (Heitz Cellars), Dick Graff (Founded Chalone Winery and its AVA), and Burt Williams (Williams Selyem & Morning Dew Ranch) to name a few. Since Drake took over he has made a name for himself, being part of awesome generation of winemakers in the state that are doing honest and authentic wines, in much the same mold of Jason Drew, who also cut his teeth in the Santa Barbara area before moving his Drew Family Cellars to the Anderson Valley. Drake who got a great education from his father, as well as some of the big stars of the Santa Barbara, Santa Maria, Santa Ynez and Sta. Rita Hills regions, like the late Jim Clendenen of ABC, but has adopted his own winemaking style and stamped his name as one of the biggest talents in the area. His winemaking sees a lot of whole cluster, sustainable and organic grapes and mostly neutral wood aging, which is old world influenced, looking to retain energy and allow for purity in the wines. Whitcraft says that his signature varietals are Pinot Noir, Chardonnay, and Syrah, but I gotta say his Gamay and Grenache are always charming, low alcohol, treats (under 13%) when I can my hands on these very limited bottlings! The Grenache, which was hand bottled, was matured in well seasoned barrels for around 11 months, with just a tiny amount of SO2 and was unfined and unfiltered, its clarification was through gentle racking. I can’t wait to dig into Whitcraft’s latest releases, though it always a huge reward to sample his aged wines, I highly recommend joining his list and or searching out these wines!
($47 Est.) 93 Points, grapelive