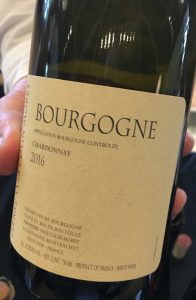 2016 Pierre-Yves Colin-Morey, Bourgogne Blanc, France.
The base PYCM white Burgundy for the 2016 vintage is a wine that drinks way above it’s price class or humble labeling with layers of classic Pierre-Yves Colin-Morey vividly brisk fruits, steely minerality and leesy notes, in fact it is not far off his Chassagne village bottling. Pierre-Yves Colin-Morey, one of Burgundy’s all star Chardonnay masters, is the eldest son of the famous Marc Colin (his dad’s place), where he worked as the winemaker from 1994 to 2005, before establishing his own domaine (with his negociant label in 2001) and recently a brand new winery, from family vineyards he inherited from his family, he has rapidly become a star in the Cote de Beaune and is now considered one of Burgundy’s top producers in league with Jean-Marc Roulot as well as his brother Bruno Colin. He prefers to use larger demi-muid barrels and eschew the use of battonnage, allowing for brighter acid and verve showing through, it makes each one of his bottlings a clear expression of its terroir and a study in mineral-driven white Burgundies. He has outstanding parcels in Saint-Aubin, Chassagne-Montrachet, Meursault, Puligny-Montrachet, and even Grand Crus Bienvenues-Bâtard-Montrachet, Bâtard-Montrachet, and Corton-Charlemagne, non of which he farms himself, he just decides pick dates, usually earlier than most others and his cellar work is exceptional, clean and precise to craft crystalline of highly sought after wines. This Bourgogne Blanc has surprising decadence and crunchy stoniness for the vintage, which is turning out much better than originally thought with this Chardonnay having lovely detail, focus and pleasing density showing loads of pear, meyer lemon and delicate peach with a hint of apple fruits, but as well defined as they are, they sit behind the veil of high tone acidity and with faint brioche, hazelnut, light wood smoke, wet river rock and spice all rounding out this medium bodied wine. This wine is a steal in the lineup along with his Saint-Aubin(s), it’s a wine to search out no question.
($34 Est.) 91 Points, grapelive