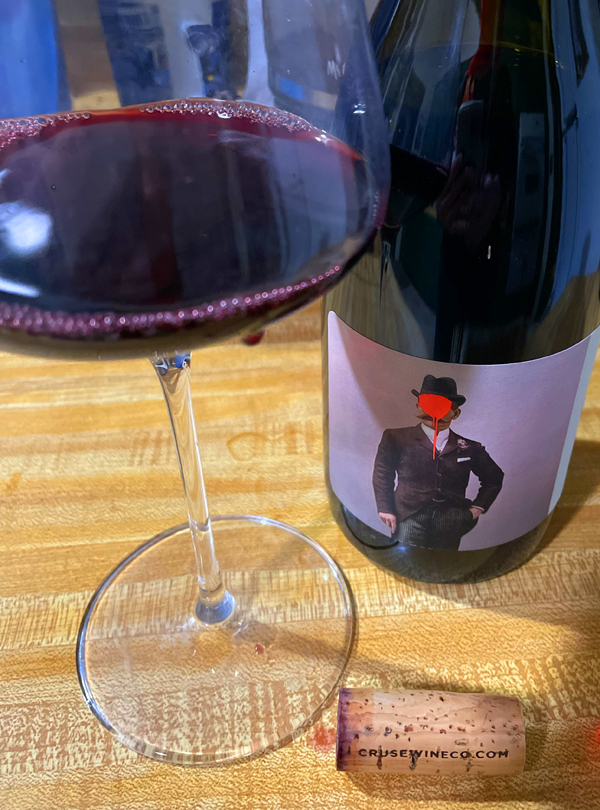 2019 Cruse Wine Co, Syrah, Charles Heintz Vineyard, Sonoma Coast.
Coming from the cool, western Sonoma Coast and coastal marine sandstone and loamy soils, mostly known for top notch Chardonnay, the 2019 Michael Cruse Charles Heintz Vineyard Syrah is an intense Northern Rhone, deeply purple and inky with earthy black fruits, spice and rustic savory elements. Capturing Syrah’s most feral side with loads of whole bunch and stemmy crunch and firm tannic structure, this wine is thrilling and impressive in the glass, reminding me of some of my favorite Cornas wines and as it opens, there layering of fruit becomes more opulent and shows off the vintage’s best qualities. The full bodied, but eclectic palate shows blackberry, boysenberry, damson plum, blueberry and cherry fruits, all framed by peppercorns, anise, black olive, mineral tones, crushed violet florals and a meatiness that perfectly plays against the dense fruit core here, this is exceptional and stylish stuff. Of course, I love the Cruse bubbly wines, but Michael Cruse has done a masterful job with this Syrah and he is just now releasing his new 2021 vintage, which I gotta think will be just as seductive as this version. Cruse notes, he has not filtered or fined the Charles Heintz Syrah and says this wine saw no additions or any manipulations in the cellar, with the exception of a small dose of SO2, that is stabilizing force to allow aging and long term enjoyment, as well as delivering remarkable freshness. This Syrah benefits from decanting and just gets better and more complex with time in the glass, but it especially is at its best with robust cuisine, like a rack of lamb, or wild mushroom dishes, and it shows off wonderfully with food.

Petaluma winemaker, Michael Cruse, as mentioned here, is a sparkling wine guru, known for his incredible sparkling wines from his leesy and sophisticated methode champenoise Ultramarine, that has a cult following, to his delightfully unique Pet-Nats, one that is made of St. Laurent, a rare Austrian grape and one made from Valdiguie, which is absurdly good too! That said, Cruse does a quality and intriguing set of still wines, like this one, with varietals ranging from Syrah to Tannat, that originally comes from close the Pyrenees in France’s southwest and most famous in the fiery tannic red wines of Madiran and Irouleguy, in the French Basque region, as well as a brand new Petite Sirah, a red blend called the Monkey Jacket and a delicious Beaujolais like Valdiguie. The still wines lean toward the natural or old world, but are as Cruse says, uniquely Californian and rawly transparent and made with indigenous yeast fermentation and as seen here in the Charles Heintz Syrah a bunch of whole cluster, with his wines being matured in mostly used, well seasoned French oak that only offer a hint of wood influence. Cruse’s main red wine, the Monkey Jacket, is a North Coast red blend that is about 51% Valdiguié, with the remainder being Carignan, Syrah and maybe a touch of other black grapes, depending on the year and is a great value quaffer. I really enjoyed Cruse’s Tannat, which comes from Alder Springs Vineyard, one of California’s jewels, and was delighted by the similar elements you see in the Basque Irouliguy wines, as well as the notable South-West French Madiran region, but this Syrah, with its restrained natural alcohol, only 13.5%, might now be my favorite now! This 2019 Syrah, only 11 barrels made, might be hard to find nowadays, but I recommend keeping an eye out for it, or get on Cruse’s list to get the latest release.
($45 Est.) 94 Points, grapelive