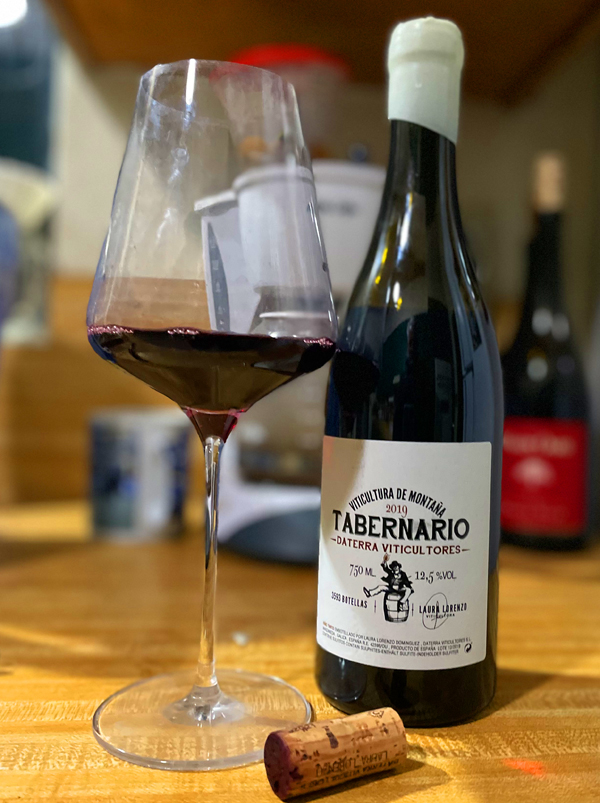 2019 Laura Lorenzo – Daterra Viticultores, Tabernario, Vino Tinto, VdT Val do Bibei, Spain.
The beautifully made and energetic, dark purple Tabernario Vino Tinto, by Laura Lorenzo of Daterra Viticultores, is made typically from about 60% Mencía, 30% Alicante Bouschet, both red grapes, along with 10% of Palomino, the white grape most commonly found in the Sherry region, which is co-fermented here, adding to complexity and vibrancy in the wine. The grapes for Tabernaria come from a variety of different vineyards that Laura works in Spain’s Ribeira Sacra region and mainly along the slopes of the Bibei River, though the blend changes depending on the vintage and conditions, with this 2019 showing well in what was a more favorable year than the last one with a ripe personality and charm. Mencia based wines from the Ribeira Sacra have the body and brightness of Pinot Noir, but with a profile that can be described as a mix of Cross-Hermitage (Syrah) and Cote de Brouilly (Gamay) with this Tabernario having those elements, showing blackberry, plum, cherry and tart blueberry fruits, wild herbs, spice, a light earthiness, savory elements and a hint of anise. The latest Tabernario opens up nicely to reveal floral and mineral tones, but stays crisply dry and loaded with fresh acidity in a wine with soft tannin and transparent detailing, making it best enjoyed with food, that helps build texture and roundness on the palate. Lorenzo, started winemaking young, at just 16 years old and has an interesting resume, including overseas stints with the famed Eben Sadie of Sadie Family Wines, who has made some of the greatest wines in South Africa, as well as Achaval Ferrer in Argentina. Laura took over the reins at Dominio do Bibei, a pioneering producer of fine wine in the Quiroga-Bibei subzone of Ribeira Sacra, taking the estate to worldwide notoriety, putting the little known Val do Bibei in Ribeira Sacra on the map, before venturing out on her with her Daterra Viticultores label.

Laura Lorenzo, one of the most talented winemakers of her generation in the Galicia region, has pieced together 4.5 hectares of rented and owned vineyards with the majority of these parcels, planted to mostly Mencia, are 80-120 years old. Lorenzo does a stellar and authentic collection of wines, from a variety of remote and back breaking sites in the Ribeira Sacra area, including her Portela do Vento, Erea, Gavela, and Azos de Vila, Azos de Pobo Soutipedre, Casas de Enriba, Camino de la Frontera and this Tabernario. In the winery, Laura’s winemaking, as her importer explains, is decidedly low tech and non-interventionist and is notably natural. Lorenzo’s fermentation(s) are done, as noted, with native yeasts and the wine is moved by gravity whenever possible, aged in neutral barrels and bottled unfined and unfiltered. The grapes for this Tabernario, coming from organic vines, were all harvested by hand and were 50% de-stemmed, skin-macerated for 10 days and spontaneously fermented with indigenous yeasts in 500L & 1000L chestnut barrels. The wine was then raised, as the winery notes, for close to 11 months and bottled without fining or filtration, and only with seriously small doses of SO2, with everything done to promote purity, terroir and freshness, as this 2019 vintage of Tabernario shows. The Ribeira Sacra Mencia based wines are more lithe and taut than the fleshier Beirzo versions, both regions are making awesome versions of this ancient varietal and I highly recommend getting to know this grape, especially by winemakers like Laura Lorenzo, who I have reviewed many times since her first wines came out in 2014, as well as the legendary Raul Perez and Pedro Rodriguez, who was mentored by Perez and makes the Guimaro wines. There’s a lot to love in Laura’s latest releases, and while no one should overlook her white wines, which amazing as well, these exceptional Mencia based offerings are some of my favorites to date, and great values, don’t miss them.
($30 Est.) 93+ Points, grapelive