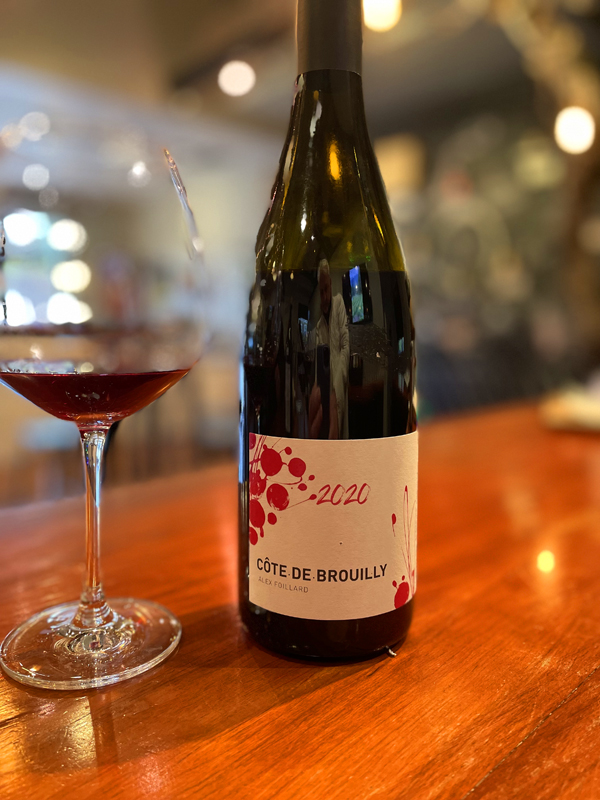 2020 Alex Foillard, Cote de Brouilly, Cru Beaujolais, France.
The gorgeous 2020 Côte-de-Brouilly by legendary Morgon producer Jean Foillard’s son Alex Foillard truly proves the new generation of winemakers in Beaujolais are more than up to the task and are making some fantastic wines as this one proves. This stunning stuff shows a family resemblance to some of Foillard senior’s most cherished bottlings, wines that are some of my personal favorites, which I covet and collect the best I can. The Cote de Brouilly, from a cooler north-facing lieu-dit Chavanne, with vines up to 60 years old on granite, schist and sandy soils, shows beautiful fruit density and purity with crushed red berries, incredible floral aromatics, stony elements, crisp acidity and delicate spices with lingering cinnamon and strawberries. The young Foillard did the fermentation, whole cluster and carbonic (maceration), in concrete tank, taking about 3 weeks with pump-overs taking place once a day for first three days. Unlike most of his father’s wines Alex chose to age, this Gamay, 100% in concrete tanks for five months, plus six extra months in bottle before release. Kermit Lynch, who imports all of the Foillard wines, says Alex’s solo cuvées are wines that have a seductive aromatic component, a silky texture, and a downright deliciousness that he exclaims is unmistakably Foillard. Adding that Alex uses tried-and-true techniques to craft his wines with whole-cluster fermentation with natural yeasts, no fining or filtration, and no additives of any kind except for a small dose of sulfur dose at bottling. There’s everything you’d want here in Alex Foillard’s lovely Cote de Brouilly and it should drink fabulously well for the next five years easily, though it is guilt free to open now, in fact, I dare you not too, it is that tasty right now!

Alex Foillard, who as mentioned, is the son of “Gang of Four” Morgon producer Jean Foillard, and who had early exposure to the world of wine, and more specifically, as Kermit Lynch explains, to the principles of sustainable and holistic farming and low-intervention winemaking. These are the methods that brought his father to stardom in natural wine circles, and even snobby Burgundy enthusiast circles, along with Jean’s like-minded neighbors such as the late Marcel Lapierre, Guy Breton, and Jean-Paul Thévenet, who were all inspired by Jules Chauvet, who pioneered these ideas in Beaujolais. Along with helping produce his family’s handcrafted Cru Beaujolais, Alex studied agriculture at the Lycée Agricole in Montpellier, then earned a degree in viticulture and enology in Beaune, that Lynch notes, while simultaneously interning at a well-respected domaine in Nuits-Saint-Georges. At only twenty-four years old, Alex Foillard bought his very own vineyards, these include about a hectare each in the crus of Brouilly and Côte-de-Brouilly, where this wine come from. Alex has successfully diversified the Foillard’s holdings, which until then, was almost exclusively in Morgon, along with the tiny plot of Fleurie. Though the vineyards were not originally certified organic, he farms them according to all organic principles, and in the 2016 vintage he made his own wines and celebrated his first harvest from those vineyards. This exceptional deep ruby and magenta/purple hued Cote de Brouilly gets better with each sip and is near perfection in its seduction of the palate, I highly recommend chasing down Alex’s wine as soon as possible.
($47 Est.) 95 Points, grapelive