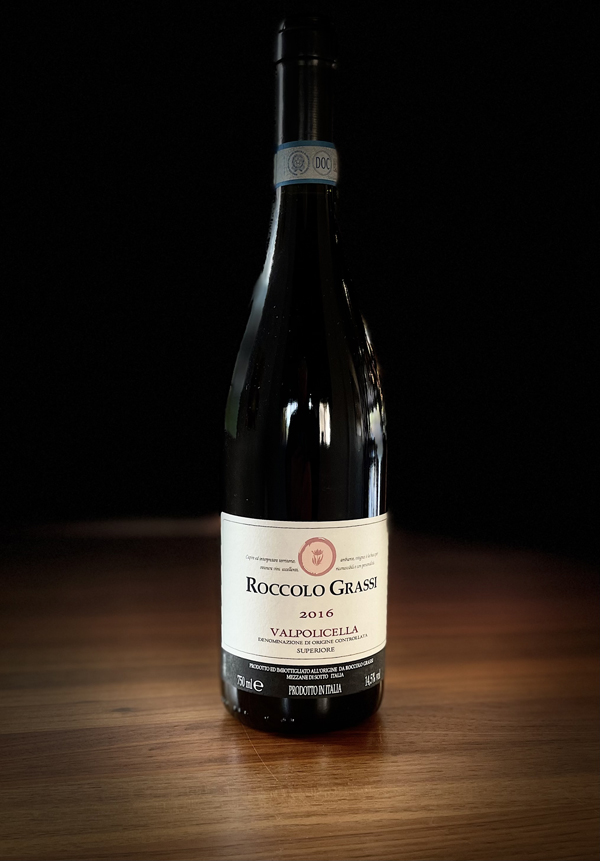 2016 Roccolo Grassi, Valpolicella Superiore DOC, Veneto, Italy.
Rare is the wine that has Valpolicella on label drink in the upper realms of the likes of Barolo or Brunello, but this Roccolo Grassi does just that and with stylist rustic charm that is not flashy at all, it shows an old world, unmistakable Italian presence in the glass and the depth and complexity is world class. Made with the classic varietals with some partially dried grapes to concentrate the flavors there is no sense of over ripe or raisiny notes, instead you get earthy and savory Corvina, rather than sweetness of a Ripasso or Amarone, with a bit of Nebbiolo like feel here with a deep range of berry and cherry fruits, spice, fresh cut tobacco, minty herbs, cedar, subtle florals and a leathery note. This is a stunning vintage with excellent richness and structure and the wine finished at 14.5% alcohol which allows the very best of the main grape here and terroir to express itself in its best light, this is a wine that way over delivers for the price and will be rewarding especially with hearty cuisine. I must say, as a fan of some the big names in the region and having had on many occasions the likes of Quintarelli and Dal Forno, this is the real deal and I recommend bargain hunters check this one out.

The Roccolo Grassi Valpolicella Superiore DOC is named for the historic vineyard here in the Veneto and comes from sites that sit on volcanic basalt soils at an elevation above 200 meters with a warm southeast exposure. The blend is Corvina 60%, Corvinone 15%, Rondinella 20% and Croatina 5% and the grapes were (after some were partial air dried) de-stemmed and fermented in stainless steel with about 15 days of skin maceration before being gently pressed to mostly used barrels, which typically is a combination of small French barrique and large traditional oval Slavoian oak casks. The highly rewarding and impressive Roccolo Grassi Valpolicella Superiore is then aged for 20 months in the wood and then rested in bottle in the cellar for another 10 full months before its is released and this 2016, a powerful vintage, is just now starting to reveal itself and should age fantastically well for decades, which is awesome for a wine in the price class. With air and food this Veneto red gains texture and added dimension with an impeccable full bodied palate, opening slowly and seductively throughout its time in your glass with hints of menthol, unsweetened coco, bay leaf and currant compote coming through, it has a beautiful tension between the fruit and umami elements and is in the end a very alluring and rewarding wine. Roccolo Grassi was founded in 1996 by Bruno Sartori and his two children Marco and Francesca, who have made the winery one of best in Veneto hills and they also do and very nice Soave, where they also have vines, as well.
($36 Est.) 94 Points, grapelive