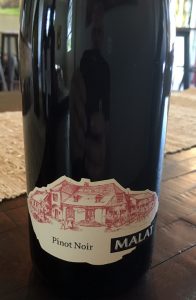 2015 Malat, Pinot Noir, Estate, Kremstal, Austria.
While known for his exciting Gruners, Michael Marat’s pet project is his Pinot Noir, which he farms organically from a 25 years vineyard site near the Gottweiger Berg (Cru) on a mix of sand, loess and Danube gravel soils, it’s all dry farmed and hand tended. Pinot Noir found it’s way to Austria as early as the 12th century with Cistercian monks first planting in the Thermenregion and it slowly spread throughout the country. Malat ferments his 100% estate Pinot in stainless steel vats using native yeast and then racks to large neutral oak casks for malos and aging, it sees about a year in the wood before bottling, allowing for a fruit forward and easy to love style to show through. This 2015 is satiny smooth with a touch of spice and smoke to go with a core of creamy cherry, plum and red berry fruits in a medium bodied wine that excels for it’s lush and easy form, while having enough complexity and energy to keep your full attention adding hints of earth, wild mushroom and a mix of mineral and baking spices.
($26 Est.) 90 Points, grapelive