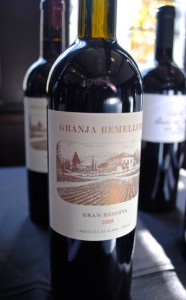 2009 Granja Remelluri, Rioja, Gran Reserva, Labastida de Alava, Spain.
In the few short years since Telmo Rodriguez returned to his family’s Alavesa estate, some of the highest vineyards in the region, he has turned Remelluri into the jewel of Rioja, but also moved Remelluri from the mainstream and created it as a cru on it’s own, making it unique and separate from their peers. Influenced by his experiences making wine from different regions, both in Spain and in France, and especially his spell at Rhone legend Jean-Louis Chave, Telmo’s wine are now expressions of site and he has made Remelluri an icon, similar to Chateau Haut-Brion or Pontet-Canet in Bordeaux or his mentor Domaine Jean-Louis Chave in Hermitage, he has also moved away from historical varietal definition and almost always refuses to talk about the grapes and make up his whites, he believes completely in terroir above varietal make up in his wines. The La Granja Remelluri Gran Reserva is from the oldest plots at Remelluri, all the grapes for this cuvee were hand selected in the vineyard, harvested alone and into small box/bins and made completely separately from the other wines, fermented in tank and large vat with native yeast and raised in mostly neutral barrels, both American and French oak were used and the wine was aged 27 months before bottling and rest until now for release. The old vines at Remelluri include Tempranillo, Garnacha and Graciano, this we know for sure, but exactly what was used here is a mystery though the Tempranillo seems to play the biggest role in this wonderful and amazing wine, most likely suppling the guts and soul in this Rioja Gran Reserva. Telmo has told me that over time he plans to add as many as 11 red varietals to his vineyards and he has been researching grapes that may have had traditional use in the area prior to Tempranillo becoming the main force in Rioja, this looks like an exciting project in the future, but in the meantime we can enjoy Telmo’s gifted touch and in particular the Remelluri estate offerings and the second line of purchased fruit bottlings now known as Lindes de Remelluri, these are some of the greatest value wines in the world. The 2009 Granja Remelluri Gran Reserva fills the glass with a brilliant ruby and garnet hue and has aromas of spice box, sandalwood and earthy berry fruits leading to a deep palate of textural pleasure and mature flavors with plum, black cherry, currant and mulberry fruits, along with mixed spice, graphite, cigar wrapper and dried flowers, finishing rich, sweet and savory with baking spices, cedar and refined tannin. The aftertaste is long and will take you places that certainly could be called heavenly, there is a real sense of greatness, with the same feelings you find when tasting wines like Rousseau Chambertin or Chateau Margaux for example, such is the quality and character of Remelluri’s Ganja Remelluri Gran Reserva! Drink this beauty over the next 15 to 20 years, this is truly world class wine, absolutely remarkable, graceful and with hidden depths, energy and passion, drink from 2016 to 2029.
($95 Est.) 97 Points, grapelive