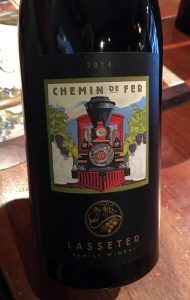 2014 Lasseter Family Winery “Chemin de Fer” Estate Rhone Red Blend, Sonoma Valley.
This 100% organic estate grown Rhone style red blend from Lasseter is a modern California version of Chateauneuf-du-Pape crafted from 65% Grenache, 21% Mourvedre and about 14% Syrah. The Chemin de Fer displays an oozing density and dark fruit character, but with harmonious balance and structure, it’s hedonistic, but not flabby or syrupy, it’s a beautiful and distinct wine that grabs your attention and wows the palate. Lasseter has put out a superb set of wines, a Semillon/Sauvignon Blanc, a Provence like Rosé and four red blends, this is a winery that leans toward all time traditions and refuse to do single varietal bottlings, with this Rhone style red being maybe their signature wine, though they make three high end Bordeaux based reds, one a Malbec based, one a “Right Bank” Merlot based, but with under 50% being Melot with Malbec, Franc and Cab Sauv and one more Pauillac like with 82% Monte Rosso Cabernet Sauvignon and a touch of Merlot and Franc, all luscious and Sonoma flavored. This Chemin de Fer Rhone Blend and the Amoureux Malbec ($65) really stood out as the most unique, with my nod going to this Grenache based wine by razor thin margins. The beautiful mouth feel and hedonistic in taste this 2014 Chemin de Fer really makes this wine stand out and leads to layers of boysenberry, blueberry compote, sweet kirsch, black plum and creme de cassis along with hints of lilacs, dried aromatic herbs, cinnamon, a mix of racy spices, toasty vanilla and sticky lavender. This wine is heady and opulent without being cloying or heavy, it gains greatly with food, it’s a charmer with robust cuisine and or with hard cheeses. Drink this impressive Lasseter Rhone Blend over the next 3 to 5 years, I hear it drinks well with your favorite Pixar film as well.
($52 Est.) 92 Points, grapelive