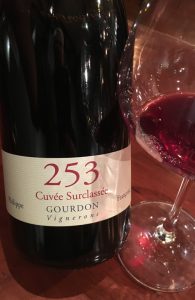 2014 Chateau Tour Grise, Cuvée 253, Vin de France Rouge, Saumur, Loire Valley, France.
One of the first generation of biodynamic converts in the Loire along with the more well known Nicolas Joly and others, Philippe Gourdon founded his own domaine in 1990 and got biodynamic certified in 1998 after farming his own single plot in Saumur with hand cared for passion. It was with joyous expectation that I got to taste this last release of his Tour Grise Cuvée 253 Cabernet Franc a deep and authentic wine of glorious natural detail and complexity with earthy/rustic charm as well as purity of form and place, it is a glorious example of varietal and terroir in the same realm as the greats of the region. The Cuvée 253 is Gourdon’s single vineyard Cabernet Franc, he also does a Chenin Noir (Pineau d’Aunis) as well, it was native yeast fermented and has non sulfur added, unfined and unfiltered, even vegans will love this one as it was stated that it is made according to vegan principals, and aging is done just long enough to retain freshness, but to allowing rewarding long aging as well. Imported by Floraison Selections, the Cuvée 253 Tour Grise, all from Saumur AOC fruit, even though not labeled as such, from the La Tour Grise estate, which is only a total of 20 Hectares, starts with a deep garnet/red color in the glass with a bouquet of earthy violets, green spices, chalky stones and wild berry notes before a sturdy palate of blackberry, mulberry, cranberry and dusty cherry fruits with a hint of plum, sandalwood, cedar, bell pepper, flinty spice and saline infused black licorice. Lovely finesse and fine grained tannins show the ultra care and handcrafting that went into this beautiful Cabernet Franc, this is wonderfully dry and lightly grippy stuff with a medium weight body and vivid intensity, this is a thrilling wine that delivers an overkill for the price! Drink this one over the next 5 to 10 years, there isn’t any reason not to drink it young, but I think if cellared well it will go a long way, best to have with country inspired cuisine that is not fussy and that has robust flavors.
($26 Est.) 94 Points, grapelive