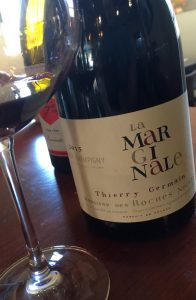 2015 Thierry Germain-Domaine des Roches Neuves, Saumur-Champigny, La Marginale, Loire Valley Red, France.
Intensely concentrated and mineral toned, the gorgeous Thierry Germain La Marginale Saumur-Champgny 2015 coats the palate with dark fruits and a perfect about of pure Cabernet Franc bell pepper, spice and earthiness. Impressive mouth feel, bigger than you’d expect with thick layers of black currant, cherry, plum and vine picked red berries this Saumur-Champigny is a stunner, wonderfully open and warm on the full bodied palate. Germain’s story is a unique one, he relocated to the Loire from Bordeaux in the early 1990s, and soon fell under the spell and influence of his spiritual father, the late Charly Foucault of the famous Clos Rougeard. Thierry would ultimately convert his entire domaine to biodynamic viticulture following the leading lights of the region. Imported by Kermit Lynch, Thierry Germain is one of the leaders in the Loire’s organic movement and his Domaine Des Roches Neuves, with vineyards that are planted in the Saumur (Blanc) for Chenin and Saumur-Champigny (Rouge) Cabernet Franc, has gained world renowned acclaim and is one of the poster child(s) example(s) of success in biodynamic wine growing in France, like Nicolas Joly, but more especially for his reds, like this one. According to Kermit Lynch, Thierry harvests on the relatively early side to preserve fresh, vibrant fruit, even though I always find his wines ripe and perfumed, his goal is to produce Cabernet Franc with purity, finesse, and drinkability, while avoiding rusticity, vegetal or weedy character, and harsh/rough tannins, and with this 2015 La Marginale, mission accomplished. This beautifully deep and dark garnet hued wine comes of a tiny parcel of 45 year old vines set on clay and Turonien Supérieur limestone, it’s only made in great vintages, is crafted from 100% de-stemmed fruit and fermented in foudre (large oak cask) with light pumpovers and then aged in a wide range of oak, most all used, from barrique to huge cask for almost two years. The layers include blackberry, red currant, black cherry and dark plum fruits, minty herb, violets, sandalwood/cedar, tobacco, a light bell pepper tone and chalky stones. Everything feels warm and round in the mouth and almost luxurious, but there is a nice purity of terroir that shines through with a touch of savory integrity. I love the rich textural presence here, this cuvee is something special, it can age for another decade, but is very compelling now.
($35 Est.) 94 Points, grapelive