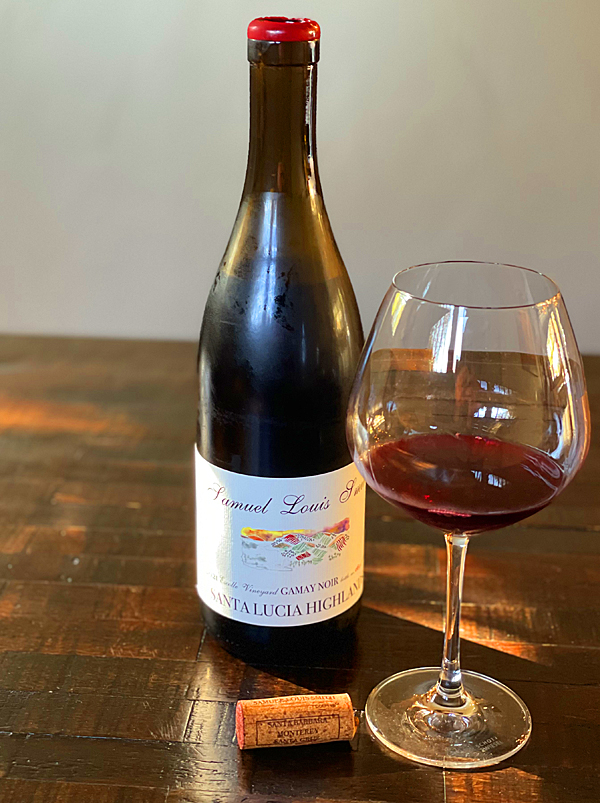 2021 Samuel Louis Smith, Gamay Noir, Escolle Vineyard, Santa Lucia Highlands.
The bright, juicy and crunchy Escolle Vineyard Gamay Noir by Sam Smith, the head winemaker at Monterey’s famous Morgan Winery, under his personal Samuel Louis Smith Wines label is an exceptional debut release of this grape in his lineup. The lighter framed, just over 12% natural alcohol, Gamay is blessed with loads of zingy acidity and floral aromatics that clear remind you of classic Cru Beaujolais with sharply layered red fruits, including plum, candied cherry, spiced raspberry and Jolly Rancher watermelon. There’s a lot of buzz about Gamay and its potential in the Monterey region, especially in the decomposed granite and sandy sites, as seen here at Escolle in the Santa Lucia Highlands, and this one shows that promise. Smith says he treated this Gamay to a 7 day carbonic maceration, plus 7 days of traditional whole cluster fermentation with both native primary and secondary fermentations. Then it saw an 8 month élévage in 100% neutral French oak barrels, after which it was bottled unfined and unfiltered, all done to capture freshness and purity.

Smith notes that, the Escolle Vineyard is located in the northern section of the Santa Lucia Highlands, a very cool zone, also explaining that this region, an 18 mile-long northeast facing bench in the windswept Salinas Valley is a prime spot for not allow Chardonnay and Pinot noir, which it is most famous for, but also Gamay and even Syrah. The mountainside appellation divides the Santa Lucia mountain range to the west from the Salinas Valley floor to the east and is set on the mentioned granite, sandy loamy soils, it is where these grapes see a long hang time and develop deep flavors, while retaining energy and lively acidity. Everything here is influenced by nearby Monterey Bay, and the pairing of granitic loam and new graftings of Gamay Noir, Smith says, at Escolle, is bringing a new SLH renaissance. Scott Caraccioli, who runs the Escolle Vineyard deserves a lot of credit for bringing Gamay to the region and selecting the clones, it has caused a sensation locally, with many producers getting in on the modern Gamay craze. In the coming months we will see a bunch of new offerings, and we can only hope they are as good and as exciting as this wine!
($36 Est.) 92 Points, grapelive