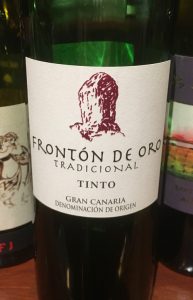 2015 Fronton de Oro, Tinto “Tradicional” Gran Canaria, Canary Islands, Spain.
One of my favorite wines, this rustic country red from Fronton de Oro is made of 90% Listan Nergo and 10% Tintilla (aka Graciano) and is from the second largest of the Canary Islands, a volcanic set of islands of the northwestern coast of Africa, and one of the world’s most unique terroirs. I’ve been following Fronton de Oro for years becoming a true aficionado of the Listan grapes and mostly Listan Nergo, one of the original Mission Grapes, that was brought to the new world in the 1,500’s by the Spanish explorers and catholic church missionaries that colonized the Americas from Chile to California. The combination of salty sea breezes, rugged mineral rich soils and Listan Negro prove to be an impressive mix that gives these wines a fierce spicy character with an intense peppery and savory flavor profile, wonderfully restrained, almost delicate, tartly vivid fruit and stony elements just add to the charms of this grape. In this case the addition of Tintilla delivers a more complete wine with a touch more floral complexity and maybe a touch more depth of fruit, though that is just my humble opinion. The Canary Islands are now fully on the world’s radar with many outstanding and critically acclaimed wines hitting the stage, including hugely talented winemakers like Roberto Santana, who helped put this exotic and very remote region on the map with his efforts at Suertes del Marquis and his own partnership winery Envinate, which is renown for their astonishing set of single parcel wines from Tenerife. Also on Lanzarote there is Los Bermejos making intriguing whites and world class grower Champagne style sparkling wines, so the Canary’s are red hot right now, and tasting this 2015 Tinto from Fronton de Oro is a timely reminder of why. The vineyards are all high-elevation plots with many above 1,000 meter mark, and in many cases on terraced slopes, they are owned by D. Antonio Ramírez who in 1977 bought a small piece of land in the hills of La Lechuza (the small town on the island of Gran Canaria where the winery is) known locally as “El Frontón” hence the name, with his sons Antonio and Pedro starting the family winery and overseeing the farming and winemaking. The Fronton de Oro Tinto is crafted from estate-grown Listán Negro grapes, with the grapes being de-stemmed and getting a cold-soak for 24 hours before pressing. The primary vinification in stainless steel tanks to keep temps down and preserve freshness, after which the wine are moved to used/seasoned American oak barrels for just about 3 months before bottling, then rested in bottle for short while before shipping. The 2015 Tinto is lively and vibrant on the palate with a lighter shade of garnet in the glass showing layers of robust spicy and tangy fruits including raspberry, sour cherry, wild plum and a red peach note along with that intense pepper, chalk dust, crunchy minerals, and a black licorice herbal/balsam note. This medium weight red is great with sea food in tomato and or wine broth, pasta dishes and rustic cuisine or BBQ’s, it can even take a small chill for picnic fare. If you want a fun, slightly funky and pure volcanic soil influenced wine, you should check this Fronton de Oro Tinto out, I love the stuff, drink as fresh as possible.
($17 Est.) 92 Points, grapelive