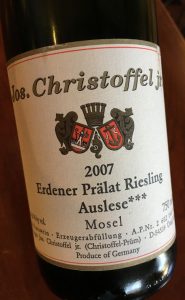 2007 Jos. Christoffel Jr., Riesling Auslese, Erdener Pralat (Three Star), Mosel Germany.
Kajo (Karl Josef) Christoffel’s Jos. Christoffel 2007 Erdener Pralat Three Star Auslese is a lovely wine, not overly honey-sweet or flabby botrytis infused, it’s generous and refined, almost Spatlese like in weight and form, but deep in flavor, it comes from one of tiniest Crus in the Mosel and one of the warmest. What a treat, especially now that Kajo is as of now in retirement from his Jos. Christoffel Jr. estate, an old school legend that also focused on sweeter styles, but ones that have interesting complexity that hides overt sugar! I don’t have as much as experience with the Jos. Christoffel Jr. wines, though their reputation has preceded them and I was thrilled to get my hands on his 2014 as well as this 2007 version of which I planned to cellar for another decade, but couldn’t resist opening. The Christoffel family in Ürzig, with top vineyard sites in Ürziger Würzgarten, Erdener Prälat, Erdener Treppchen and Wehlener Sonnenuhr is an traditional winery and interestingly they also related by marriage to the famous Prüm family in Wehlen, forming a Riesling dynasty in the region. The estate has been run by Karl Josef Christoffel (Kajo) for a generation of greatness and has saved an extensive library of well-aged wines that are regularly released. All of Kajo’s wines are fermented in the traditional 1000 Liter casks with the natural yeast, they are uniquely and somewhat oxidative, or so I’ve found, though they have been proven agers. According to Dr. Loosen, Erdener Pralat is a small slice of perfection, the four-acre Erdener Prälat vineyard produces maybe some of the greatest wines in the Mosel River valley. Its 100 percent south-facing, with steep slopes, red slate soils and it is an extraordinarily warm microclimate that yield wines of unequaled power and nobility. The vineyard’s exposure, combined with the warming effect of the river reflection and the massive, heat-retaining cliffs that surround it, ensures it’s exceptional ripeness in almost every vintage. So who would I be not to agree with that? And yes, this stuff is extremely seductive with yellow peaches, honeycomb, wilted roses, marzipan and caramel notes coming through along with hints of lemon curd, dried pineapple, a hint of almond/hazelnut and baked apricots. With air this wine settles into it’s groove with a vibrant tone showing up, it loses it’s oxidative side and pumps out a more fresh note adding a spicy element, saline and wet stone with a lingering pleasure of sweetness. The sugar density, obviously substantial, never feels intrusive and it is more about richness, a textural quality rather than sweetness, impressive in such a Riesling, and this wine grew on me with every sip, this 2007 is more more complex and thrilling than the 2014, which was dull by comparison. This is a wine that just gets better when paired with cuisine, spicy Asian especially, but not exclusively in fact cheeses, smoked meats and lightly sweet deserts also make this wine shine, drink over the next decade.
($33 Est.) 92 Points, grapelive