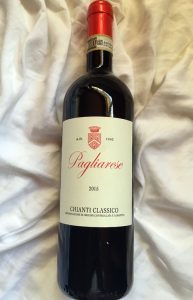 2015 Pagliarese, Chianti Classico DOCG, Castelnuovo Berardenga, Tuscany, Italy.
Fèlsina’s new release is a wine from an old property near by, and it’s a classy Chianti Classico that offers a lot of value and authenticity.  Pagliarese is a historic Chianti Classico estate located in Castelnuovo Berardenga, nestled between Fèlsina and Castell’in Villa. In the 1960’s and 70’s, Pagliarese was, in fact, one of the most highly regarded estates in Chianti Classico. However, by the 1980’s, the property was in need of some investment, particularly in the vineyards. In 1995, the Poggiali family, owners of Fèlsina, bought the estate and set out to replant 28 of the 32 hectares using a massale selection from the oldest vines at the property. Since that time, some of the grapes from Pagliarese have gone into the Fèlsina’s Chianti Classico, though a majority of the grapes and wine from the estate has been sold off, but now Felsina is now ready to show this estate in all it’s glory. Starting with this 2015 vintage, the Poggiali’s decided to make their inaugural release from the estate made from, and unlike the Sangiovese only Felsina, the wines at Paglierese are, of course, Sangiovese-based, they are also blended with small amounts of Canaiolo and Mammolo, but without the use of Merlot or Cabernet Sauvignon that has been the norm in recent times. The soil at Paglierese is a bit more sandy than that at Fèlsina. According to the winery the terroir is unique at Paglierese, as It combines sand, rock and clay with some tufo (a type of volcanic rock), whereas in Felsina’s Chianti Classico vineyards it is more dominated by stoney albarese soil. Given the differences in two terroirs, as well as the fact that the wines are blended (particularly with the Cannaiolo), means that the Pagliarese wines tend to be a bit more elegant and soft. The graceful style is accentuated by a classical wine-making regimen that promotes elegance over extraction including a gentle maceration regime as well as extended aging in mostly in neutral 50HL Slavonian oak botti. The resulting wines are beautifully refined, pure examples of Chianti Classico. This re-birth of Pagliarese in Castelnuovo Berardenga, in the southern zone of Chianti Classico represents a true renaissance of one of Tuscany’s forgotten treasures! This 2015 is ripe and lush on the palate showing the region’s success in this vintage along with the finesse and elegance you normally find in Felsina’s own wines with layers of smooth red berry, plum, currant and strawberry fruits along with classic dried tobacco, minty/menthol, anise and light cedary wood notes. This Chianti Classico has muted tannins and subtle acidity, but the structure is there, though hidden slightly by it’s seamless unfolding and opulent mouth feel, this is certainly an easy wine to enjoy young, and especially with simple country cuisine and or hard cheeses like Pecorino.
($28 Est.) 91 Points, grapelive