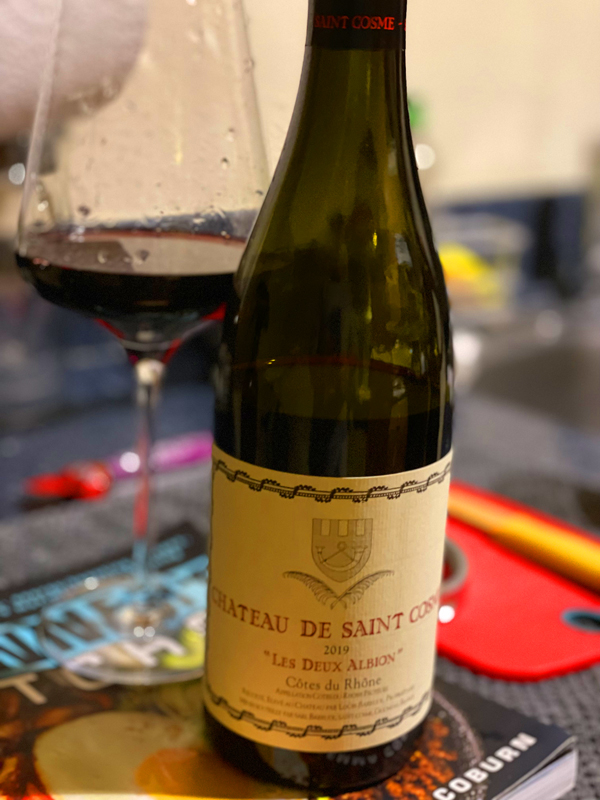 2019 Chateau de Saint Cosme, Côtes-du-Rhône “Les Deux Albion” Rhone Red, France.
The incredible and ultra affordable Chateau grown bottling of Côtes-du-Rhône, Les Deux Albion, is a classic full bodied and meaty Grenache, Syrah and Mourvèdre blend from Louis Barroul at the famous Chteau de Saint Cosme, best known for their historically outstanding Gigondas wines. This vintage is exceptional and is very much inline with recent versions with a light violet perfume, crushed dark berries, earth and spices, along with some Syrah and Mourvèdre meaty notes as well as a rich and opulent mouth feel, its full bodied palate rivals much more expensive Rhone offerings and lacks for nothing. The flavors unfold in dense layers of boysenberry, pomegranate, damson plum, blueberry compote and black cherry fruits, as well as fine accents of tar, licorice, sticky lavender and raw peppercorns. This wine comes from Côtes-du-Rhône area grapes grown not far away from this Gigondas property’s picturesque hillside vines, this ancient estate is still is overlooked by its centuries old Chapel of Saint Cosme, where it got its current name, and is located in the shadow of the Dentelles near Gigondas and Vinsobres. This higher elevation zone has a higher percentage of Syrah, as found here, and it thrives in the cooler parts of Gigondas, and, especially well, in Vinsobres, which recently gained a full AOC, and where Saint Cosme has their new Chateau de Rouanne site, it is a property that is now making wines almost the equal to the well know more southern zones. The 2019 Côtes-du-Rhône Les Deux Albion is a blend of Syrah, Grenache, Carignan, Mourvèdre, and Clairette (the white grape) from the three Côtes-du-Rhône-Villages communes, which are Plan de Dieu, Saint Maurice, and Cairanne.

The purple/garnet hued Chateau de Saint Cosme Côtes-du-Rhône Rouge Les Deux Albion was made using 100% whole cluster and native yeast in its fermentation, with the Grenache, Syrah, Mourvèdre and the tiny amounts of other grapes being all co-fermented together in a combination of cement and conical wood vats, with this wine seeing a lengthy maceration. The wine was then aged 18 months in the same combination of vessels, both the well used wood and the concrete tanks impart minimal influence on the wine’s personality with the terroir being the main factor in this Les Deux Albion’s flavor profile. The Côtes du Rhône vines are set on the classic hardened clay soils that also include ancient alluvium, limestone marl and a scattering of stony pebbles, which drain well and force the roots deep to get nutrients and moisture, helping provide complexity and concentration. The Chateau de Saint Cosme has been a notable wine producing site since Roman times, with Barruol’s estate set on the original Gallo-Roman villa and ruins that still has ancient vats cut into the limestone cellars and the Barroul family has owned and made wine here since 1490. As I’ve noted and as is well reported, Louis Barruol, one of the Rhône’s greatest winemakers, has a style that beautifully combines the region’s typical ripeness with a balancing freshness, no mean feat in the hot climate of the southern Rhône Valley. Barruol says that one of the keys to his wine’s vitality is the use of stems for most of the red wines, explaining that the stems absorb alcohol during fermentation process and help retain acidity and tannin, which also makes them nicely age worthy as well. For those seeking Rhône hedonism on a budget will be well served by enjoying this incredible wine, which is one of my personal favorites, it’s one I highly recommend to friends and stock up on myself!
($25 Est.) 94 Points, grapelive