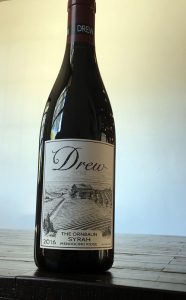 2016 Drew Family Cellars, Syrah, The Ornbaun, Mendocino Ridge.
The new vintage of Drew “The Ornbaun” Syrah, a beautiful wine with an intense spicy nature, is a blend of two vineyards, both on silty clay and loam(y) marine sedimentary soils, on the western side of Anderson Valley. With the vineyard sites being on the extreme side of cool climate, one Valenti Ranch at 1,350 feet up, planted to McDowell and Cote-Rotie Clones is just 6 miles from the Ocean and the other Perli Vineyard, which sits at 2,400 feet, that is planted to Chave Selections (Hermitage Clones) with a few vines that are also inter-planted with Grenache and Mourvedre. Drew is now one of the hottest wineries in California with Jason Drew making some of the state’s best wines, the label was founded as a tiny operation, with Jason and Molly Drew starting Drew eighteen years ago with a clear goal in mind, which was to: to craft small lot coastal wines that express site specificity and traditional varietal character. While the beginnings of Drew began in the Santa Rita Hills AVA in 2000, with a set of Pinots and Syrah, they transplanted their small operation to the Mendocino Coast in 2005 to establish their estate ranch and winery, where they craft mostly ultra cool climate and high elevation Pinot Noir and Syrah. The Drew’s continue their long standing partnerships with several local vineyard growers who share their passion for sustainable and meticulous mostly organic farming practices, including Morning Dew Ranch, Valenti Ranch and Perli Vineyard. These vineyard sources are chosen for their climate, clonal selection and complexity of soil types, while Drew’s cellar approach is restrained and his winemaking practices remain focused on traditional methods, that includes a high percentage of whole cluster and native yeast fermentations, with gentile hand punch-downs and in most instances, without any no fining or filtering, as well as using a low number of new barrels per vintage. The 2016’s, and especially this “The Ornbaun” is wonderfully delicate in fruit and deep in spice and lift, taking some serious time to open up in the glass, it has loads of iron, red and black pepper as well as sticky lavender, high toned red currant, cherry and plum, later adding a darker sense of blackberry, boysenberry and blueberry along with hints of violets, chalky stones and wood notes. At this stage it seems a little shy, when compared with 2013, 2014 and 2015, so allow more development in bottle to give rich flavors, even though it is medium bodied and fresh now, perfectly going with food, it should get better, fuller and lengthier over the next 3 to 5 years, patience looks to be rewarded here. I absolutely love the earthy tones, energy and vibrant details of this Drew  “The Ornbaun”, it’s one of the best values in their gorgeous lineup, there isn’t a wine in Jason’s latest set that disappoints and as mentioned in the last two vintages this winery is making some of the best wines in California bar none! The Pinot and Syrah here are just exceptional and if you haven’t joined their list you are missing out.
($32 Est.) 93+ Points, grapelive