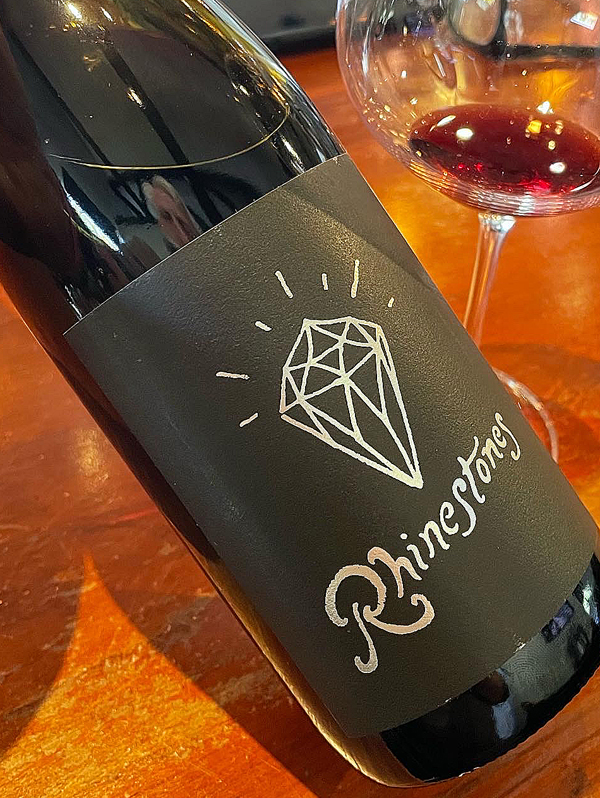 2020 Bow & Arrow, Rhinestones, Pinot Noir/Gamay, Johan Vineyard, Willamette Valley, Oregon.
Winemaker Scott Franks Bow & Arrow’s Rhinestones is an all natural and organic blend of Pinot Noir and Gamay Noir coming from the Johan Vineyard, a biodynamically farmed site in the Willamette Valley and fermented with lots of crunchy whole cluster, making for a darkly ripe, edgy and spicy wine, that took its inspiration from the Loire Valley’s Cheverny region. This vintage really leans on the stemmy (bitter) side of things and really put a bite into the medium bodied palate, which means this wine needs a pretty hearty meal and protein heavy dishes to smooth out the bitter elements, but still makes for fun wine with black cherry, plum and earthy berry fruits at its core along with bright peppery notes, a touch of leather and porporri florals. Over the years I’ve really loved this bottling from Portland’s Bow & Arrow, it usually is close to 60% Pinot and 40% Gamay in the blend, though exact percentages changes year to year depending on what the vintage gives and this dark garnet/ruby hued wine always has a raw and rustic character as this 2020 version shows intensely. Most all of Scott’s red wines showcase a more restrained personality and a savory style that is less fruity than you’d expect with an energetic high acidity, as this vintage of Rhinestones clearly displays in the glass.

The Bow & Arrow Rhinestones, is as Frank notes, a blend, as mentioned above, that is solely determined by nature and the vintage, with the grapes brought into the winery cold and freshly picked, using, as noted, the whole bunches and full stem inclusion with an all native yeast fermentation. Frank also employed a primary fermentation and a partial carbonic maceration, then the blend was then aged in a mixture of concrete and old barriques. This wine maybe a signature effort at the Bow & Arrow and according to Frank, this Rhinestones best communicates what Bow & Arrow is all about, which is transparency and authentic terroir. The Johan Vineyard, a certified biodynamic site in Rickreall area of the Willamette Valley, is largest source of fruit for Bow & Arrow, as it was for this wine, it is farmed by Dag Sundby and Dan Rinke and is set on Helvatia and Santiam soils which were formed by glaciolacustrine deposits over silty loam(s) and clayey alluvium. The Loire Valley provided lots of inspiration for these Bow & Arrow wines, with this one, along with their Air Guitar, an Anjou themed red blend of Cabernet Franc and Cabernet Sauvignon as well as their set of Sauvignon Blancs and the Johan Vineyard Melon de Bourgogne, all of which I suggest checking out if given the chance. Bow & Arrow, the urban Portland micro winery, is committed to producing hand made artisan, fun, eccentric and delicious wines with a nod to the old world and with a modern twist, and even better is they are incredibly well priced and guilty free!
($24 Est.) 88 Points, grapelive