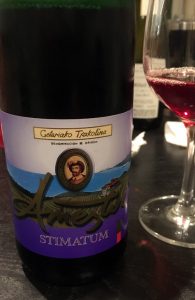 2017 Ameztoi “Stimatum” Getariako Txakolina Tinto, Spain.
The Basque Beaujolais! The Ameztoi Stimatum (Esteemed) is 100% Hondarribi Beltza from vines grown on limestone in the Getaria region of northwestern Spain with a vine age from 10 to 100 years old and is fermented and aged in stainless steel. Grown on an exposed peninsula north of Bilbao this red was done with native yeasts and bottled with that touch of spritz like the whites usually have, making for a dry, but fruity fresh, easy to quaff wine with low natural alcohol and soft in tannin. This maybe one of the most pleasing, intriguing and fun picnic wines in the world, it’s deep purple/garnet color contrasts with it’s bright lightness of body. Ameztoi is one of the top producers of Getariako Txakolina with Ignacio Ameztoi being the seventh generation of his family, carrying on their tradition of winemaking Txakolina in Getaria. The winery owns 20 hectares of vineyards in the best sites which are from vines that can almost be seen from St. Sebastian, crafting wines that have terroir and the influence of the cool Atlantic Ocean. This 2017 Ameztoi Stimatum, with it’s skin contact for 20 days is beautifully dark in the glass and has a spicy and floral bouquet opening to it’s light/medium palate with crushed violets, white pepper, fresh picked wild berries, black cherry and racy currant fruits along with a zippy acidity, a touch of cinnamon, basil/herb and a hint of almost carbonic creaminess. Those that like Gamay, Dolcetto or Trousseau wines will love this red, it is so drinkable and friendly with a wide range of cuisines, it just makes for huge smiles, drink this stuff up fresh.
($22 Est.) 91 Points, grapelive