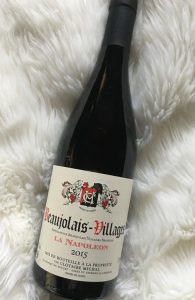 2015 Domaine Clotaire Michel, Beaujolais-Villages, La Napoleon, France.
Wow, this is great stuff, one of my favorite under $20 bottles of the year so far, what a value, those that like Foillard or Lapierre will want to get moving quickly to score this fabulous Beaujolais-Village from rising star Cloture Michel, who has worked at some famous addresses and who makes all natural style wines from a unique terroir. After working at the top notch Languedoc estate Clos Marie, Cloture Michel then headed to Cornas to work five years with the legend Thierry Allemand, and now crafts Cru quality Gamays from plots, that like Fleurie, are set on pink granite, sand and quartz with some vines that are over a hundred years old. His parcels are in the south of Brouilly, near the small town of St. Etienne la Varenne, his vines face south and have lots of age to give maximum flavor. Michel’s 2015 La Napoleon is utterly fantastic with amazing and deep perfume, earthy spiciness and gorgeous dark fruits as well as vibrant inner energy and natural acidity, it’s a medium bodied effort with satiny class, but with subtle rustic charms, it highlights it’s terroir perfectly and shows off the vintage’s ripe and joyous force. How a 12% alcohol wine can show this much complexity and depth tells you something about the winemaker and the quality of the grapes in this beautiful wine, it has the same level of pleasure and grace found in Dutraive’s Domaine de la Grand Cour, which is saying a lot, trust me this is awesome stuff! The Domaine Clotaire Michel Beaujolais-Villages La Napoleon Cuvee 2015 starts with intense crushed violets, lilacs, incense and leathery/earthy tones along with racy black currants which leads to a vivid palate of plum, black cherry, strawberry and marionberry along with walnut oil, saline, black licorice as well as hints of mineral, zesty gauva, red peach and flinty stones. This all organic Gamay rocks, and at this price is stupid good, it was whole cluster fermented, native yeasts were used, everything done with gentile care, but in an old school way with an ancient vertical press using neutral cask and tank for elevage and the wine is unfined and unfiltered with extremely low sulfur. This was an impressive discovery, and another intriguing producer imported by Balanced Wine Selections, be sure to get this one while you can, it’s the real deal!
($19 Est.) 93 Points, grapelive