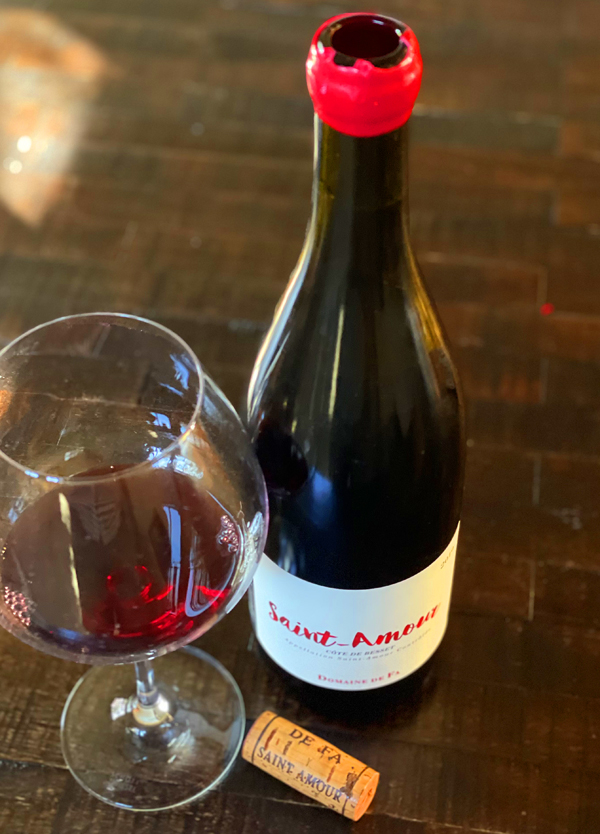 2019 Domaine de Fa, Saint-Amour “Côte de Besset” Cru Beaujolais, France.
Made by the famous Graillot family, of Cross-Hermitage (Rhone) fame, the Domaine de Fa Saint-Amour Côte de Besset is a ripe and pure Gamay done in the mode of Morgan legend Domaine Lapierre with a spicy whole cluster punch to go with a range of juicy red fruits and a silky tannin structure, making for an excellent and delicious quaffer. Alain Graillot’s son Maxime, who makes the wine at both Alain Graillot along with his own Domaine des Lises, and his brother Antoine, who has taken on a leading role here in Beaujolais, where they do a standard Beaujolais, a superb Fleurie and this lovely Saint-Amour. Practicing biodynamic and employing a natural whole cluster fermentation, with a semi-carbonic maceration, the Graillot’s Saint-Amour Côte de Besset is vibrant and expressive with pretty floral intensity and a lighter framed medium bodied palate of crushed raspberry, plum, cherry and strawberry fruits as well as having brambly spice, sandalwood, minty herbs, anise and fig notes. This wine, coming from 40 year old vines, up at over 400 meters, set on mainly crushed granite, sand, and with big chunks of granite and quartz scattered about, is a tiny production Gamay that was aged for one year in a single used Foudre.

The Graillot family, as noted, has a long history of making wine in the Northern Rhone with a proven track record of producing long lived and outstanding Syrah from the mentioned Cross-Hermitage AOC as well as the epic Hermitage hill and the Saint-Joseph region, and who are gaining a reputation for some exciting wines here in Beaujolais. Interestingly, Maxime and Antoine, had a love of Gamay, which, they say, led them to some of the picturesque areas of Beaujolais, where they really enjoyed the wines and natural approach to winemaking, which fit their ideas and style. Then, as their importer notes, the two brothers struck Gamay gold in 2013, when they found and purchased a special 5 hectare vineyard named ‘En Besset’ that was located in the northernmost section of the appellation near Saint Amour and Julienas, a site that under their direction has shown some real promise. This high altitude stony hillside with its granite based soils is a prime spot for outstanding Gamay, as this 2019 shows. After that they also purchased two prime parcels, one in the top cru of Fleurie, plus another in the lesser known cru Saint-Amour, which are potential stars too. There’s a lot to admire here in this 2019, a fairly difficult year, and Domaine de Fa looks set to rival some of Beaujolais new generation of talents and should be on the radar of Gamay enthusiasts, I highly recommend checking their lineup out, which also includes an intriguing Saint-Veran Chardonnay.
($32 Est.) 92 Points, grapelive