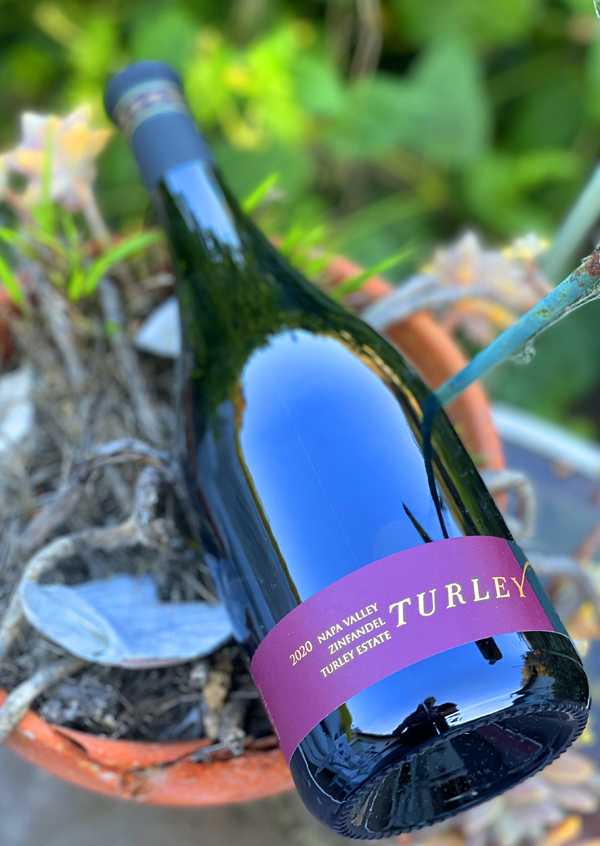 2020 Turley Wine Cellars, Zinfandel, Turley Estate, Napa Valley.
The vintage 2020, which suffered from extreme drought and horrendous wildfires, in some cases produced awesome wines, such as Turley’s Napa Valley Estate Zinfandel, a wine of pure hedonism and expressive flavors. Lower yields mean higher concentration, deeper complexity, and better quality, as this wine, which the winery adds, highlights the fact that certain bottlings, made in drought years are often some of the best you will find. I was delightfully surprised and impressed with this dark inky purple Zinfandel and its gorgeous aromatics, which drew me in, as well as the ultra satiny full bodied palate of black raspberry, plum and currant jam fruit layering, along with subtle wood, spice and florals. The wine adds some savory elements and just the right amount of vanilla and anise, it went beautifully with a range of toppings on a pizza and never felt cloying or hot, it was an easy to love wine, enjoyed with family, of which, rarely gets a chance to splurge on a wine such as this. There is a lot to admire in Turley’s collection these days and winemaker Tegan Passalacqua is turning out some fabulous stuff that is faithful to traditions, but seem more authentic and balanced than some earlier wines. The opulent and luxurious native yeast fermented Estate Zinfandel was made using mainly used oak, only 20% new, with a combination of about 80% French and 20% American barrels employed, which really suits these wines and in particular this one. This wine is a celebration of old California, with the winery taking a page from their beloved old vine vineyards, they planted several of the varieties most commonly interplanted in old Zinfandel vineyards, including Carignane, Trousseau, and Cinsault.

The Turley Este vineyard is located in St. Helena and is set on volcanic and alluvial soils and has a mix of Zinfandel, Carignane, Petite Syrah, Trousseau, and Cinsault vines that are all organic and old school head trained, from plantings that date back to the mid-1990s.Turley says they were unbelievably lucky, explaining that as a winery that produces primarily Zinfandel, a variety that ripens much earlier than most others, with a harvest that usually begins at the end of July or at the beginning of August. This being especially true, In a drought year like 2020, their harvest was already well underway, and most of our Napa grapes were safely in, well before the Glass Fires began at the end of September. So most wines were absolutely not affected by the horrible smoke taint that destroyed many region’s red wine grapes. In the aftermath, Turley did have to make sacrifices when it came time to decide which vineyards they harvested and forfeit, even more so when it came to bottling, with winemaker Tegan Passalacqua vetoing any and all wines, even whose lab results returned clean, if he felt their character had somehow been compromised in this tough vintage. This is why, the winery continues, that you’ll see no Turley 2020 classics like the Rattlesnake Ridge Zinfandel or Petite Syrah, no Dragon Zinfandel or Cabernet, no Cedarman, no Heminway, no Casa Nuestra, and no Estate Cabernet in the lineup, such is the pursuit of quality and honestly found here. The utmost care to produce a premium set of wines, with compromise, not taking any chances, is something to admire and cherish, which I am going to be grateful for and recommend to all that will listen. In a year that saw greed over quality concerns in some quarters, I am thrilled by the commitment shown by Turley, these are wines not to be missed!
($40+ Est.) 93 Points, grapelive