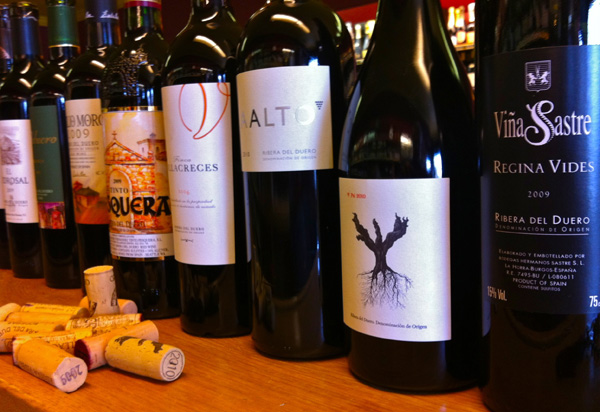 Once the mighty and high rent district of Spain with the legendary Vega Sicilia and more, the Ribera del Duero seems like a region ready to embrace a new world, at least a new generation, while still being an area that likes to think of itself as Spain’s answer to France’s “Left Bank” of Bordeaux, and while comparison does flatter the Ribera del Duero in some ways, the region offers much more and should aim for more. With Pingus and Vega making wines that surpass the First Growths in quality and price in most vintages, things will not change too quickly at these addresses, but even Peter Sissack of Dominio de Pingus is making subtle changes at his famed estate where he plans to pursue the use of less new French oak. I read an interesting critical overview of Ribera del Duero by Neal Martin of the Wine Journal and the Wine Advocate in which he puts forth the idea to challenge the old ways and go for a unique identity allowing the terroir to show more than the winemaking, and while I agree it surly is going to be a painful exercise and will be difficult to say the least. But there is a new young generation there that is ready to make this happen, as there is in most of Spain’s regions, and this is a good thing.

That said, there are some great wines, traditional to Ribera del Duero, that stand out and still offer great value. When you think of Ribera del Duero you think of red wines, and of course you think of Tempramillo, or Tinto Fino as it is known in the Ribera del Duero and unlike Rioja there is not interest in whites or roses, or is there much Garnacha or Graciano if any grown here, it really is about Tempranillo, though they have always had and still do have Cabernet Sauvignon and Merlot as well with both being part of many high profile wines. In most cases you’d think that the Cabernet added power and color, but I’ve been told repeatedly that the Cabernet Sauvignon adds vibrancy and lift to the intensely ripe and forceful Tempranillo, which is ironic, but I’ve heard it enough to think there must be some truth to it, plus I have never had a Cabernet based wine from Ribera, so it must perform best as an addition to the primary Tempranillo, which I must admit makes the most logical sense otherwise I’m sure someone would have done a straight Cabernet Sauvignon like Sassicaia did so successfully in Italy, creating the whole Super Tuscan category.

For the new generation of Ribera, it is still very much a work in progress and still a ways of in the future, but there is a few new wines to search out, like the artisan wines of Alfredo Maestro Tejero, who in protest of the establishment doesn’t even label his wines Ribera del Duero! I first tried his wine a year or so back and they are fantastic examples of what the futures could and should hold for this wonderful region, though I still enjoy Pesquera and some other classics of the region as well. Here are a few I recently tried and enjoyed very much, they offer a good range of style and price points. 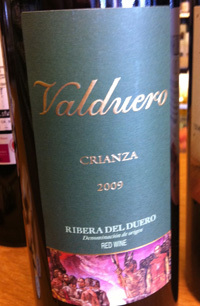 2009 Bodegas Valduero, Crianza Ribera del Duero DO, Spain.
This is quite ripe, lush and even lavish for a standard Crianza, and while not well known this was a wonderful surprise and makes for a complete and pleasing wine, I have tasted this twice recently with the same results, this is the real deal. Blackberry, raspberry jam and candied cherry fruits, vanillin cream and anise all fill the palate and coat the mouth and linger on the lengthy finish. Drink now and often, as this is a fun and easy wine with soft tannins and low acidity that highlights the vintage.
($29.95 Est.) 92+ Points, grapelive 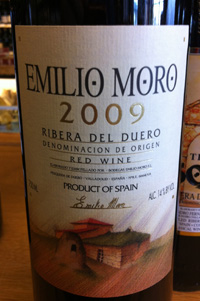 2009 Emilio Moro, Moro Tinto Ribera del Duero DO, Spain.
Even though this 2009 Moro comes from a ripe and open vintage this wine is tight and has hard angles that need some time to smooth out, and while Emilio Moro remains a favorite of mine I was hoping for more, so I will give it more time to develop before passing final judgement, not a complete disappointment, but I was not at all thrilled by this year and it’s harsh edge is a bit tough as of yet. That said it does have a bit of promise with smoky red fruits emerging from this tight beast of a wine and given air it does provide a lengthy finish. The blackberry and dried flowers still seem shy and the earthy notes and graphite mineral touches overshadow the fruit. I might be too hard on this Ribera del Duero, but it is because I am usually such a fan and love the people behind this great estate very much, and I have fond memories of 2001 and 2004…
($26.95 Est.) 87-90? Points, grapelive 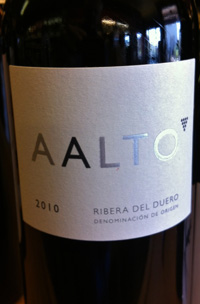 2010 Bodegas Y Vinedos Aalto, Aalto Ribera del Duero DO, Spain.
Aato is modern and industrial chic, a winery that is a cool as it gets and it is a cult sensation, much like maybe you’d think of Screaming Eagle or Harlan in Napa Valley, and the Aalto wines reflect this to perfection. The 2010 Aalto is wonderfully clean and full bodied with amazing texture and density showcasing ripe fruit and loads of small French barriques which frame this rich wine and gives a sweet smoky character without being too much of a good thing. This vintage is my favorite yet for this winery and it does very much remind me of Harlan in style, but with Tempranillo flavor profile, I not afraid to admit it, I really liked this very “Parker” style wine. The nose has sweet cassis, acacia flowers, lead pencil and smoky vanilla that leads to a very lavish and thick palate of blackberry, plum and cherry liqueur with hints of licorice, mineral and espresso. The depth and length are world class and the is a dark complexity that is utterly seducing in this Ribera del Duero. Maybe none to subtle, but hedonistic and sexy in the extreme, this wine is like seeing Kate Upton in a bikini.
($54.95 Est.) 94 Points, grapelive 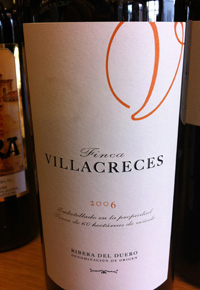 2006 Finca Villacreces, Ribera del Duero DO, Spain.
Even with a little Cabernet and Merlot this 86% Tempranillo Ribera feel purely of it’s place and unfolds in classic style with candied cherries, raspberry and sweet plum pudding. A nice level of maturity has set in and this wonderfully balanced wine just flows seamlessly across the palate with lush texture and grace. Warm oak notes, mineral and anise add complexity and frame the fruit well while cassis and vanilla linger on the finish. From a vineyard site not far from the fabled Vega Sicilia the terroir does show here and I just love the polished sense of this lovely wine and hope to try it again in the distant future. This Villacreces is a Ribera del Duero gem that should drink nicely for many years to come.
($41.95 Est.) 94 Points, grapelive

2009 Alfredo Maestro Tejero, Vino de la Tierra de Castillo y León (Ribera del Duero) Spain.
The Rebel of Ribera, Alfredo Maestro makes all natural, low sulfur and biodynamic wines of sublime quality and unique terroir style, even if he refuses to classify them as Ribera del Duero after going in his own way. This wine is glorious and lovely textured and considering the artisan touch and detail it is a steal and a half. I could not find many if any faults in this full and vibrant Tempranillo. I must say, I want to try all of his wines and soon, as I hear his Vina Almate is also to die for, and I think the word is getting out, better to get them while you can. Jose Pastor, his importer is making these wines available in the US, and we wholeheartedly thank him for bringing this treasure to us!  The 2009 is darkly colored, opaque and mouth filling with lavender and toffee notes that stay from nose to finish while only tiny bit of reduction, maybe because of the low sulphur, shows on the nose, but quickly disappears to allow a sweet nose of roses, mineral and red berry fruits which lead to a dense palate of plum, cherry and berry compote. Having tasted this wine from 4 different bottles, I can honestly say it is totally honest and pure it showing terroir and quality, it was the biggest surprise of this recent tasting (May 2012), and while I really always have had a soft spot for Pesquera, this Alfredo Maestro Tejero was my secret favorite, though less of a secret now.
($30 Est.) 94 Points, grapelive (re-print from May 2012) 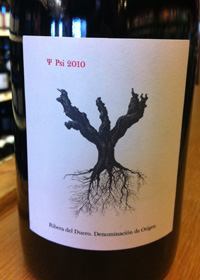 2010 PSI (by Dominio de Pingus) Ribera del Duero DO, Spain.
The PSI is an old vine cuvee from Pingus and local growers made to preserve old vine plots in the region, it is crafted by Peter Sisseck (Pingus) and Pablo Rubio. This organic and biodynamic wine is fermented in concrete vats and partially aged in concrete, wood and stainless to showcase the nature and sense of place, this red is a wonderful expression of terroir and old vine heritage and is a rare artisan wine that is highly prized. Peter Sisseck’s Pingus is a more Bordeaux like wine that requires long cellar times to be at it’s very best, so it is great that his talents are on display in this PSI, a wine that can be drunk young and that is remarkable affordable, especially when when you see Pingus at $450-600 a bottle and compared to Chateau Lafite or Latour, the PSI at $45 is a steal really when you consider the quality on offer. The nose has a touch of smoke, but shows a mineral streak, black fruits and acacia flower leading to a refined and round palate of blackberry, blueberry, cherry and poached plum fruits with chalky mineral essence, truffle and ripe tannins. The PSI comes across less like Bordeaux, and more like a Rhone or Burgundy wine with more lift and elegance in it’s youth. This wine looks set to be a star in it’s own right and should drink great for many years to come. It was a great treat to be able to sample this beautiful and richly textured wine from the heart of Spain’s famed Ribera del Duero.
($45 Est.) 93-94 Points, grapelive