Snapshot: The Wines of the Ribera del Duero
By Kerry Winslow 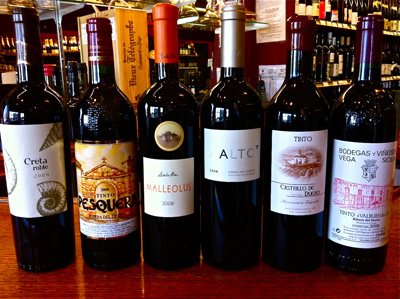 The Ribera del Duero of Spain is an amazing region full of world class wines, and while many are considered the equal of the First Growth Bordeaux and priced as such, there are also lots of wonderful wines that don’t rock the wallet. The wines of Pingus and Vega Sicilia are legends, but the region has many great estates including Alejandro Fernandez’s Pesquera which is dear to my heart as it was one of my big “Ah Ha” wine moments, I was left spellbound by the 1994 Grand Reserva, a wine that had many layers and characteristics that took me through a journey, it was earthy like an old Beaucastel Chateauneuf, then delicate like a Burgundy, and gaining depth on the finish that reminded me of a great Pauillac, it still haunts me. Recently I tasted a panel of Ribera wines and found some most interesting and tasty wines, and re-kindled my own passions for the region. Most people think of Ribera del Duero as a modern or young region, but wine has been made here for close to 2,000 years, and serious wine production began in the Twelfth Century when the Cluny Monks settled here from Burgundy France, and Vega Sicilia dates back to 1864, though it was into the 1970’s before the world really took much notice.

Tinto Pesquera and Alejandro Fernandez were key to a huge interest in the region in more more recent times and his darker and richer winemaking helped highlight the difference with the more well known Rioja region. I myself have always thought of Ribera as the “Left Bank” of Spain, right or wrongly I find more power and more edgy flavors in the Ribera wines and certainly wines like Pingus have a very smoky Bordeaux character that are unmistakable. There is something of a mystic to Ribera, it remains a secretive and almost closed region, not flooded with visitors as of yet, though the people are very welcoming, with the exception of maybe Vega which doesn’t take many people through it’s sacred doors. I once shared lunch with many famous Spanish winemakers, and discovered the wines of Bodegas Emilio Moro and to my surprise I received a beautiful letter in the mail from the Moro family thanking me for taking the time to taste their wines and an invite to come see the estate, of which I still hope to do.

Ribera has even greater potential in the future, this dry and rocky plain along the Duero River has many more discoveries to come, and as a new generation comes to force I’m sure there will be even greater diversity and rebirth. A strong biodynamic trend is coming out of the shadows here, much like it did in Burgundy in the 80’s and as happened more recently in Bordeaux, the inspiration of Domaine Leroy, Romanee-Conti and Pontet-Canet of Pauillac is happening here, and beyond that the “Natural Wine” has reached Ribera with the talented  Alfredo Maestro Tejero becoming a sensation with intriguing wines.

Spain is a hot bed of excitement for wines, even though the economy is shaky and times have been tough, there is movement happening there from the glories of Rioja, Priorat, Rias Baixas and Jerez to the new hot spots in Ribero and the exotic Canary Islands, Spain is buzzing and Ribera del Ribera has not been left behind.

2009 Monteabellon”Avaniel” Ribera del Duero, Spain.
This 100% Tempranillo is unbaked and lively fresh with tangy plum and dark cherry notes with hints of sweet herbs, spice and bright acidity. While simple and light it is very easy to enjoy and served slightly chilled it would super with summer lunch or warm evenings.
($15 Est.) 90 Points, grapelive

2009 Creta, Roble Ribera del Duero, Spain.
Wow, this classic Tempranillo has rich fruit, elegant layers and length, don’t miss this if you see it, what a beauty! Fresh plums, spring flowers, blackberry, fennel spice and cherry fruit all come together nicely and make for a seriously good wine. One of the best under $20 reds I’ve had this year, the 2009 Creta is a gem, and I loved the sample of the 2010 as well, so be sure to ask for this wine and get a bunch, you will not be disappointed.
($18 Est.) 93 Points, grapelive

2008 Finca Villacreces “Pruno” Ribera del Duero, Spain.
Made mostly from young vines, the 2008 “Pruno” is bit more tannic and edgy than its big brothers from Finca Villacreces, but still has plenty to admire with intense fruit, mineral and subtle wood. This is a name to watch, and I tried the 2009 “Pruno” and it is bit rounder and fuller, so that is also a fine effort to score. Black cherry, briar, raspberry, rocky earth tones and cranberry all play roles in this wine. I can’t help think of a Saint-Estephe, it has a subtle Bordeaux quality to it, which is not a bad thing at all.
$24 Est.) 90 Points, grapelive

2008 Aalto Bodegas y Vinedos, Aalto, Ribera del Duero, Spain.
For a modern full bodied Ribera look no further, the Aalto Bodegas y Vinedos wines are the new “cult” wines of the region, I would dare to compare them to Harlan to give you an idea on how they taste and their style. Mariano García (formally of Mauro and a former oenologist at famed Vega Sicilia) and Javier Zaccagnini began Aalto in 1998, and it is named after famous Finnish Architect Alvar Aalto, even if I’m not sure why. In a short time this has become a very sought after wine, both the Aalto and it’s higher priced Aalto PS sibling are highly praised and prized worldwide. This vintage shows ripe and powerful fruit in what some might say is like Napa Valley, but regardless it is very pleasing and showy with cassis, licorice, espresso, plum and a core of boysenberry fruit with a seem of mineral, vanilla and dark chocolate covered cherries.
$65 Est.) 94 Points, grapelive

2008 Emilio Moro”Malleolus” Ribera del Duero, Spain.
Malleolus, which locally translates to a small vineyard, is a fine and austere wine with lots of class and refinement, it is a slowly opening wine that comes to life with air and then the magic unfolds with amazing texture and length coming out in full force from behind serve dusty tannins and shy fruit. Once rolling and open is pumps out power and richness, though I might like to give it a few more years to develop in bottle. Beautiful spring flowers, dried roses, chalky minerals and smoky cedar show on the nose while the palate leads with black cherry, plum and bramble berry. The complexities are enhanced and framed by the quality and the deft use of oak rather than smothering them with pencil lead, clove, earthy spices and firm tannins that don’t feel sharp or out of place. This is an impressive old world wine that gets better and better in the glass and doesn’t let you down, in fact it leaves you begging for more, and there is more to come.
$70 Est.) 94+ Points, grapelive

2009 Alfredo Maestro Tejero, Vino de la Tierra de Castillo y León (Ribera del Duero) Spain.
The Rebel of Ribera, Alfredo Maestro makes all natural, low sulfur and biodynamic wines of sublime quality and unique terroir style, even if he refuses to classify them as Ribera del Duero after going in his own way. This wine is glorious and lovely textured and considering the artisan touch and detail it is a steal and a half. I could not find many if any faults in this full and vibrant Tempranillo. I must say, I want to try all of his wines and soon, as I hear his Vina Almate is also to die for, and I think the word is getting out, better to get them while you can. Jose Pastor, his importer is making these wines available in the US, and we wholeheartedly thank him for bringing this treasure to us!  The 2009 is darkly colored, opaque and mouth filling with lavender and toffee notes that stay from nose to finish while only tiny bit of reduction, maybe because of the low sulphur, shows on the nose, but quickly disappears to allow a sweet nose of roses, mineral and red berry fruits which lead to a dense palate of plum, cherry and berry compote. Having tasted this wine from 4 different bottles, I can honestly say it is totally honest and pure it showing terroir and quality, it was the biggest surprise of this recent tasting, and while I really have a soft spot for the Tinto Paquera, this was my secret favorite, though less a secret now.
($30 Est.) 94 Points, grapelive

2009 Tinto Pesquera, Ribera del Duero, Spain (Alejandro Fernandez)
After a long love affair with Pesquera wines in the 90’s and early 2000’s I started to lose a bit of faith, I admit I was not happy with some vintages I tried and almost gave up hope of igniting that spark again, then this wonderful Tinto Pequera come and spoke sweetly to me, seducing me and bringing me home to the magic. The love is back and the 2009 is a fantastic wine that has all the joy that I remember and while the 1994, 1995 and 1996 were personal fags, I think I might just have found an equal. The nose is full of flowers, fruit, game and mineral and the palate is lively with vigor, tension and richness that coats the mouth with plum, raspberry, black cherry and spices. Just a subtle touch of animale adds interest with out turning you off, while the acidity and mineral tones really showcases the beautiful balance of this wine. This wine has everything it should and proves again the greatness of its terroir and the passion of the people that make it.
($36 Est.) 94 Points, grapelive

2006 Vega Sicilia “Valbuena” No. 5, Ribera del Duero, Spain.
The Vega Sicilia winery was founded in 1864 by Don Eloy Lecanda y Chaves, who planted many Bordeaux grapes, mostly Cabernet Sauvignon, but also Merlot and a few others, much of which remains today along with classic Tempranillo vines. The Valbuena is Vega’s second wine after Unico, and is made from Tempranillo and Merlot and released 5 years after harvest, hence the 5 in the name. Besides the famed Unico and this Valbuena, the Bodega also owns Alion next door and it is worth checking out as well. I have been lucky enough to have tried 3 different bottles of the 2006 Valbuena now and each has been dreamy and near perfect, without question these wines are exceptional and refined. The 2006 Valbuena is like Vega’s “Right Back” wine, lush, round and full of pleasure, but still very very serious with intense black fruits, toasty wood and graphite like mineral notes to go with black plum, cherry and cassis that flow on the palate. This wine is just starting to hit its stride and should drink well for another 10 years. No question, small yields, attention to detail and restrained winemaking mark the Valbuena as a classic, enough said.
($185 Est.) 95 Points, grapelive