2010 Fronton de Oro, Tinto Gran Canaria D.O. Canary Islands Red, Spain.
I am hooked on the Canary Islands, these are very unique and fun wines, and the quality is getting better with the passing minute, especially interesting is this 2010 Fronton de Oro Tinto from Gran Canaria (Grand Canary Island) which is on the Spain Island chain sitting just off the Arfican coast on a lump of volcanic rocks in the Atlantic Ocean. After three or four vintages, I just adore the Fronton de Oro reds which are rustic, briny and exotic spiced wines with hints of flowers, flinty mineral and transparent red fruits. The 2010 Tinto is made of Preto, Listan Negro and Tintilla grapes and raised traditionally in cement and sees almost no wood, while some of the cuvees see time in both French and American barrels, though the Tinto is non the worse and is a racy wine. The nose is earthy and has a touch of game, plus a cayenne red pepper note along with dried roses and wild flowers to go with spiced plums before a Pinot Noir like weighted palate of strawberry, brandied cherries, chalky minerals, garrigue, orange rind, raspberry coulees and truffle.
($18 Est.) 90-91 Points, grapelive 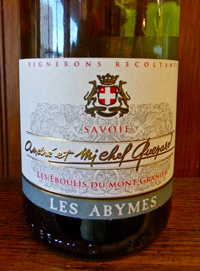 2011 Domaine Andre et Michel Quenard, Savoie white “Les Abymes” Jacquere, Les Eboulis du Mont Granier, Savoie, France.
This is a Domaine to watch, with fantastic wines and a huge coolness factor and this lovely Jacquere is a steal! Imported by Kermit Lynch and already with a rabid fan base these wines get scarce quick, amazing really for a less known region like the Savoie, but the wines are just stunning. The Bergeron and Mondeuse wines from the 2009 vintage were the stars that brought Quenard to America’s attention, but I am equally impressed by this little Jacquere, and I love the price too. The 2011 Andre et Michel Quenard Les Abymes is vibrant and vivid with lots of citrus and white stone fruit that is light and zesty, but not lacking in flavor or style, this is a very pleasing white with lemon/lime, white peach and hints at apple and tropical fruit with brisk acidity and fresh stoney minerals. This impressive wine finishes with touches of nectarine and lime with lingering citrus flower.
($17 Est.) 92+ Points, grapelive

2010 Domaine le Sang des Cailloux, Vacqueyras “CuveeFloureto” Rhone Red, France.
This magical Rhone red is pure hedonistic heaven for old vine Grenache fans and the fans of Chateauneuf-du-Pape should drive into this wine head first! A long time quality producer, imported by Kermit Lynch, who else, Domaine le Sang des Cailloux, blood of the stones, is a top estate in Vacqueyras just down the road from Gigondas and the famed Chateauneuf-du-Pape areas of the Southern Rhone Valley. This 2010 Cuvee Froureto is about 70% Grenache with a bit of Syrah and Mourvedre as well, showing violets and pepper, grilled meat, melted licorice, black cherry, grenadine and crushed rock. The mouth filling palate is spicy, vivid and both sweet and savory with sublime structure that plays true to the vintage, one of the finest in the region, just maybe the best in my lifetime. This Sang des Cailloux Vacqueyras is a real special wine, I know I’ll be drinking this and so should you, and look for it to get even better over the next 4 to 6 years.
($36 Est.) 94 Points, grapelive