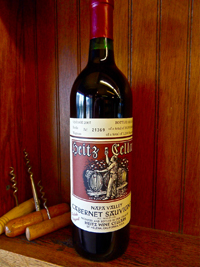 2007 Heitz Cellar, Cabernet Sauvignon “Trailside Vineyard” Napa Valley.
The Heitz Cabernet lineup from 2007 all are wonderful wines, from the basic Napa to the intense Martha’s, but I do think the 2007 Trailside stands out in the group and is a wonderful and classic wine that is as pure as can be. Not as minty as the famed Martha’s, the new Trailside has plenty of licorice and creme de cassis both on the nose and on the palate with touches of sage spice, cedar notes to go with rich blackberry and cherry fruit while fine grained tannins hold things together. Being such a late release has really help the wine fill out and soften the texture allowing for much greater pleasure and making for a more rewarding experience. Heitz has seemingly got back to the top echelon of winegrowing and is re-establishing their creditability as a top Napa producer, especially with this set of 2007 Cabs. This 2007 Heitz Trailside is dark, lush and lengthy with subtle wood and refined structure, while still being a bold Napa style wine, with hints of tobacco leaf, black currants and minerality adding interest. While not a bargain wine, the Heitz Trailside is still about $30 less than the Silver Oak Napa Valley, and is much more interesting by comparison. Drink now and for the next 5 to 8 years.
($70 Est.) 94 Points, grapelive