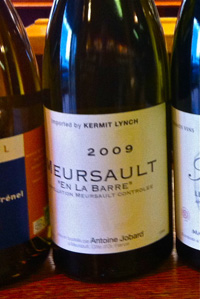 2009 Antoine Jobard, Meursault “En La Barre” White Burgundy, France.
While the 2008 and 2010 vintages were better, especially for whites in Burgundy, the Jobard Meursaults are suburb wines and worthy of attention, with this 2009 Meursault En La Barre really showing lots of class and pure flavors. Antoine Jobard’s wines are done in a more serious and learner style than most Meursault with a more Puligny like intensity and firm acidity, though the edge has been taken off this 2009 and it shows the riper year and more round developed characteristics making it a drink young style white Burgundy without giving up the depth and focus. The nose has a classic matchstick, hazelnut note with white flowers, lime and marmalade leading to a palate of lemon, river soaked stones, pear and hints of peach with brioche and vanilla oak shadings present in the background. With air you get a slight reduction and some clove and fig mingle on the finish which is slightly salty and has lingering lemon curd and nuttiness. I would certainly chase down the 2008’s, and keep an eye out for the upcoming 2010’s, but this is the one to drink now.
($72 Est.) 92 Points, grapelive