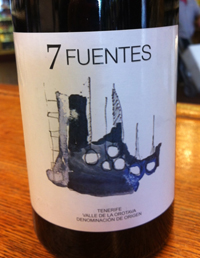 2010 7 Fuentes, Bodega Soagranorte (Suertes del Marqués) Valle De La Orotava, Tenerife, Canary Islands Red, Spain.
It is very appropriate that I write this review today, as it is on the same day that Spain has won the European soccer championship with a crushing 4-0 victory of Italy, making it 3 major tournaments including the Euros and the World Cup in a row! Bravo and Congrats to La Roja on making history. Back to wine, Spain is on a roll here too, and I have fallen head over heals for the wines of the Canary Islands especially the reds made from Listan Negro and Tintilla grapes. The 2010 7 Fuentes red is made from 90% Listan Negro and 10% Tintilla (also known as Graciano) and is aged in 90% cement vats and a bit in neutral French oak casks, and is organically produced on the Island of Tenerife. This wine is medium weight, bright with fresh and savory red fruits and zesty spiciness which seems to perfectly capture the terroir and sense of place perfectly. The nose starts with a hint of earthiness and a peppery mineral element to go with dried flowers and kirsch before a lifted palate of plum, strawberry and dried red currants with cayenne, lavender, chalk and violets. This vibrant wine can be enjoyed with many seafoods and cheeses as well as meat dishes, though I imagine it going with almost anything really.
($24 Est.) 92 Points, grapelive