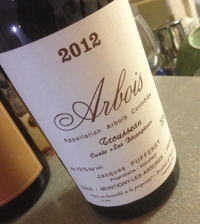 2012 Jacques Puffeney, Arbois Trousseau, Cuvee Les Berangeres, Jura Red, France.
The great Jacques Puffeney has decided to retire, he will continue with everything he has in the cellar, which include the 2014 harvest and the odds and ends he is toying with, but from 2015 on the vines will be leased out to Burgundy producer Marquis d’Angerville for its Domaine de Pélican label. Puffeney is a Jura legend and will be missed, this will leave a big hole in the region and it’s wines, his classic styled wines from his home in Montigny-les-Arsures are and were standards of the area and are highly prized, sadly he didn’t have anyone to take over his 17th-century cellars and his glorious vineyards. Jacques Puffeney’s whites were/are old school, sherry like and seriously groovy, they are long lived and certainly will be collectors items in a few years, but I adore his Trousseau, his Arbois Trousseau Noir is my all time Jura favorite wine, it always makes me happy to drink this wine, and the 2012 is a stunning example, one of the best vintages I’ve had to date of this geeky Jura red. Jacques “Santa Claus” Puffeney, have you seen a picture of him? Well, it looks like a friendly shopping mall Santa Claus or Father Christmas/Saint Nick and has a sly grin, celebrated 52 years as a winemaker with this years harvest and will call it quits, but he will consult and still make a bit of wine just for personal use, bravo Jacques, we salute you and all your success and thank you for all the joyous gifts you brought to the wine world. There couldn’t be a better Wine of the Day than this 2012 Jacques Puffeney Arbois Trousseau Les Berangeres, it is classic and glorious Jura red wine, balanced and stylish with savory earthiness and tangy red fruits, it starts with juicy almost Morgon like youthful plum, black cherry and strawberry fruits, mineral notes, wild herbs, peppery spice, mint tea and mushroom with a hint of leather and cedar. The latest Puffeney Trousseau weighs in at 13%, and has a pretty deep hue, it’s is a little more ruby in color than the last few years, it is wonderfully focused and vivid, this is charming stuff, the finish is lengthy, but there is bright acidity, silky tannin and it should fill out over the next year or so in bottle, it will reveal a bit more traditional funk over time, the easy fruity elements are appealing now too, I thoroughly enjoy it as is and hope to get my hands on a few more bottles, as this Rosenthal import selection is highly prized and sought after, it is worth the chase though, drink over the next 3 to 5 years (2015-2020), bravo Mr Puffeney, and congrats on your retirement, thank you for the experiences and great wines!
($40 Est.) 93 Points, grapelive