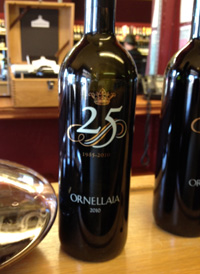 2010 Tenuta Dell’ Ornellaia, Ornellaia Bolgheri DOCG, Tuscany, Italy.
the 2010 Ornellaia is in a special bottle, this is the 25th Anniversary Edition with a label celebrating 25 vintages in bottle from 1985 to 2010, and even a difficult year didn’t stop Ornellaia from making an monumental wine from this famed estate near the Tuscan coast. Ornellaia is the second most famous Super Tuscan after Sassicaia, which was the first, and while similar in reputation this giants of Italian wine are very different creatures, the Sassicaia is almost all Cabernet Sauvignon with a touch of Cab Franc, with Ornellaia being a more rounded blend of Cabernet Sauvignon, Merlot, Cabernet Franc and Petit Verdot, this makes Ornellaia more lush, lavish and a tad more accessible when young, even though this is a powerful and tannic wine, it is less austere than the Sassicaia in most vintages, but both wines are as fine and as good as First Growth Bordeaux, with Sassicaia being Chateau Latour like and Ornellaia comparing well to Chateau Margaux. The Merlot grown in Bolgheri is powerful stuff and it gives Ornellaia it’s weight, the 2010 shows impressive depth, density and length, with the good dose of Petit Verdot adding inky color to it’s strikingly dark opaque hue, while the Cabernets add power, character and spice to the whole of this wonderful Ornellaia. The nose is slightly shy at this young stage, but there is soft floral tones, creme de cassis, espresso bean and graphite before entry to a thickly rich mouth of dark currants, black cherries, blackberry and wild plum fruits, mocha, truffle and smoky char as well as cedar, cinnamon, vanilla and cigar box. This wine is robust and firm from start to finish, but it is not aggressive or porgy, this is refined and stylish wine, though it should be given some time to develop, I’d say 5 to 7 years would be enough to allow things to heighten and fill out and it should be a grand vin for up to two decades, drink from 2020 to 2030. It was a super opportunity to try this wine, it is always a massive treat to taste Ornellaia, it almost never disappoints and is one of the world’s top wines, no question.
($200 Est.) 94+ Points, grapelive