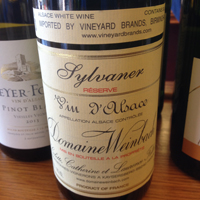 2013 Domaine Weinbach, Sylvaner Reserve, Clos des Capucins, Vin d’ Alsace, France.
Domaine Weinbach is one of my favorite Alsace producers along with Deiss and Marc Tempe, and their Sylvaner is absolutely sublime, certainly the best around that I’ve tried from the region. Sylvaner, also known as Gruner Sylvaner, is now believed to an ancient eastern European grape, a cross between Traminer and Hunnic, a grape thought to be an Austrian wild grape, though it could very well come from Hungary or Romania. I had always thought it was a man made hybrid varietal, oops, shows you can learn something new all the time. The best versions of this grape come from Alsace and parts of southern Germany, but it seems to be losing favor in both France and Germany with many vines being replaced and it had it’s best run between WWII and the 1970’s, though Franken in Germany seems to be having a mini revival and are embracing as their own using those funky squat retro bottles. The wines you find now being made from Sylvaner tend to be mostly dry, and Domaine Weinbach’s is wonderfully dry, mineral intense and very flavorful, a classy and beautiful example. Domaine Weinbach’s tragic loss of star winemaker Laurence Faller, who died of a sudden heart attack last, has left the wine world and especially Alsace with a void, she will always be missed, but she and her spirit lives on in these new Weinbach releases. The 2013 Sylvaner Reserve Clos des Capucins starts with bright citrus, hints of oyster shell, mineral, white flowers and green apple with a light shinning golden hue in the glass leading to peach, tangerine, tropical notes and river stones along with a touch of salty/briny spices. There is surprising vigor and vibrancy with a nice lift of acidity and refined charm throughout with a round mouth feel, Sylvaner rarely reaches these heights, I happily recommend this lovely wine.
($25 Est.) 91 Points, grapelive