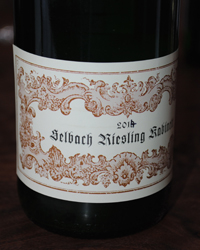 2014 Selbach, Riesling, Kabinett, Saar, Germany.
The Saar Kabinett from Selbach is a wonderful Riesling and especially this up coming 2014 release, which was shown to me by Johannes Selbach, of Weingut Selbach-Oster, in January of 2015 as a pre-release cask sample. 2014 was looking like a perfect vintage until constant rain started falling late in the season, which promoted rot in the vineyards, then a huge plague of fruit flies emerged just before harvest, so between the careful picking, sorting and fly ruined grapes, the year ended on a very tough note. What fruit that came in was pretty good with all the right flavors and wonderful intensity, but it will be another small crop, like the 2013 vintage. From what I learned from Johannes and from what I tasted there will be some exceptional wines, but you’ll have to be careful, and there is more delicacy in the wines, lighter and less intense in the dry wines at this stage, the Kabinett level wines seem more expressive and vital at this stage, like this Selbach Saar Kabinett, while it is hard to known about the denser Spatlese and Auslese at this early stage, though I understand there will be very few BA, TBA and Eiswein in 2014 due to the conditions mentioned, best to stock up on 2011, 2012 and 2013 stickies! The Saar Kabinett is bright, forward/fruity and vivid with glorious bounce and lift, it shows vibrant white flowers, kiwi, lime and lime blossom, green apple, grapefruit and white peach along with liquid mineral, crunchy stones and plenty of mouth watering brine, saline and tangerine. A hint of flint and white tea, some honey and dreamy texture all add up to a classy, flexible and stylish offering from Selbach, be sure to keep an eye out for this 2014 when it is released in May or June of this year, the sweetness is matched perfectly with tangy acidity, this will drink great young and drink well from 2015 to 2019 as well as age up to a decade.
($18 Est.) 91 Points, grapelive