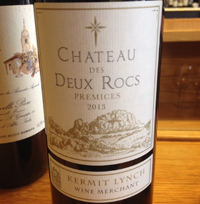 2013 Chateau des Deux Rocs, Cabrieres Rouge “Premices” Laguedoc, France.
Jean-Claude Zabalia, a long time Languedoc vignerons, worked more than twenty years at Saint Martin de la Garrigue before recently creating Château des Deux Rocs, and is now crafting wines with his own beliefs and vision. The Château des Deux Rocs wines are imported by Kermit Lynch a longtime admirer of Jean-Claude’s talents, and the latest release, the 2013 Premices Rouge is just hitting the shelves, and while the 2012 was a nice wine, this 2013 is much, in my personal opinion, better and more distinct with richer character, focused detail and lovely layers of flavor. The vineyard is old vine Grenache, Carignan and Syrah from mostly organic vines on Schist soils at about 1,000 feet, protected from the wind by the Vallée des Crozes, a unique/terroir area of Cabrieres, mostly known for dry Rose in the wilds of the southern Languedoc. In the 2013 Promices Jean-Claude chose 60% Syrah and 40% Grenache, all fermented on nature/native yeast in stainless, with the varietals vinified apart and blended later, they both saw only stainless aging, but with no fining or filtering. The 2013 Chateau des Rocs red is lush, with a nose of wild flowers, pepper, earth, red and blue fruits leading to a medium/full palate of blackberry, boysenberry, raspberry and plum fruits with hints of flinty/stones, minty herb, cracked pepper, fennel, lavender and currant/blueberry elements. The wine feels flowing and silky with well polished tannins and a subtle acidity, it has a nice refined old world charm with just enough earthy/savory edge to balance the fruity nature. This well made and highly enjoyable red is a another top value offering and should be drunk often and without quilt over the next few years, best from 2015 to 2018.
($17 Est.) 91 Points, grapelive