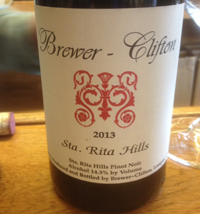 2013 Brewer-Clifton, Pinot Noir, Sta. Rita Hills.
The last year has been a great one for the talented duo of Greg Brewer and Steve Clifton, they have made some fantastic wines, put some great vineyards online and received wonderful critical acclaim from the world’s wine press, to say they are on a roll would be an understatement! Having tasted most of their wines going back to their 2000 vintage, I can honestly say their are crafting the best wines of their career, even though I have a personal fondness in my heart for a few particular vintages, like the 2000 Chardonnays and the 2004 and 2005 Pinots, but what is remarkable is that after all the glories that 2012 brought them, I think the 2013 wines might even be better! The 2013 Brewer-Clifton Sta. Rita Hills Pinot, following the 2012 that won best American Pinot in Wine Spectator’s Top Ten Wines of 2014, coming in at #8 wine of the year, is not taking a backseat to anyone, this is a beautiful wine of very similar quality and character, it to me feels more exotic, racy and expressive at this stage than the 2012 and I like the livelier acidity and heightened aromatics even more. The nose shows violets and roses with wild raspberry and lavender oil leading to a vivid and sweet Pinot fruit palate with plum, morello cherry, strawberry and raspberry fruits, minty tea spice, saline, licorice, baking spices and just a hint of vanilla/cedary wood. This wine has a bit more to come too, it should develop nicely over the next 2 to 5 years, allowing the sweet core of fruit to give way to secondary earthy elements and fill out, but it certainly is sublime now. At 14.5% it is full and ripe in style, yet it feels more refined and alive in the mouth than the 2012 with good vigor and vibrancy, this is sexy and seductive stuff, it is an amazing follow up to a great wine, bravo, drink from 2015 to 2020.
($40 Est.) 94 points, grapelive