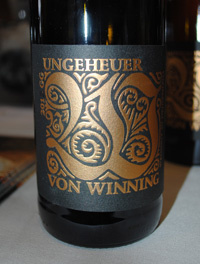 2013 Von Winning, Riesling, Ungeheuer, Grosses Gewachs, Pfalz, Germany.
I think Stefan Attmann might be the greatest winemaker you’ve never heard of and his von Winning wines are some of the best in the world, period, that’s it, especially his Grosses Gewachs Rieslings, which on are on par with the top Grand Cru Burgundy producers, like Laflaive, Lafon, William Fevre or California producers like Marcassin, Aubert and Kistler. Recently I tasted through von Winning’s cask samples of 2013 wines with Andreas Hutwohl, who was lengthy and patient with me in explaining the vineyards and techniques used by the estate to make such amazing and mind-blowing wines. The 2013 wines were thrilling expressions of dry, intense Riesling and while the Grand Cru Pechstein may end up being 100 Point perfection, certainly the 2011 and 2012 were close, I adored the Ungeheuer best at this stage and maybe that is because, like Terry Theise suggested, it might be feeling a tad riper in style, but regardless this wine is pure sex in a bottle and ultra classy from start to finish. I have mentioned before, von Winning is inspired by the Burgundians and there is long lees contact and the Grosses Gewachs spend time in French barrique, but they remain as German as German can be, think of the German world cup soccer team, power, poise, control, playing the world game and winning it all, that is how you can relate to this majestic wine. The 2013 Ungeheuer Grosses Gewachs starts with stony mineral, brioche, citrus flower and tropical notes leading to a layered and lush palate of lemon, minty lime, apricot, peach and almost a cherry taste along with clove, salted caramel, grapefruit, green banana and mango all wrapped in cedary wood, brisk acidity and Chablis like steely mouth feel. This is totally gorgeous rich Riesling Trocken, seductive, exotic and haunting, again this wine is as good as any Puligny or Corton-Charlemagne, and I must point out that the price reflects that, while not cheap, it is a top value in this class of wine, the quality level is insane, von Winning is a winery to be on your bucket list, and you can’t go wrong with this 2013 Ungeheuer Grand Cru which should be available this coming winter. Without question, this glorious Riesling will be better on release than this cask sample, and it will continue to gain over the coming years, drink anytime, but you should know it will age fantastic with a 15 to 20 year drinking window!
($65 Est.) 97 Points, grapelive