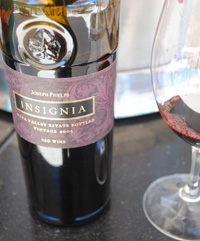 2005 Joseph Phelps, Insignia, Proprietary Red, Napa Valley.
What a pleasure to taste this wine, I must say a big thank you to the winery for having this beautiful and stunning library release open for tasting at their wine garden, they are doing their tastings mostly outside until the winery gets it’s massive remodel finish. I highly recommend a Napa trip and an appointment at the Phelps winery during this time, it is an awesome setting and experience, even if you miss out on a cellar tour, you get a chance to taste a bigger selection of fantastic wines, outdoors in the heart of the Napa Valley, not a bad deal. I was up in Napa for a quick trip, but was pulled to Joseph Phelps and I am grateful I gave them a call and was able to taste through the offerings, their lineup included the 2011 Cabernet, some of their Freestone wines, which were super, more on later, and two vintages of their flagship Insignia, the 2006 and the gorgeous 2005. While the 2006 was certainly good, it has began to mature quickly, best to drink early, but the 2005 is flat out awesome with a youthful look and feel still and incredible length and detail showing now in the glass. This 2005 is almost all Cabernet Sauvignon, but with a few percentage doses of Petit Verdot and a splash of Merlot, this is a powerful and full bodied wine with some firm tannins, but it feels ultra decedent and lavish on the palate, it is smoky and has a subtle floral tone on the nose, but it makes it’s biggest impact in the mouth with an explosive array of black and red fruits and a rich mocha note with blackberry, plum, creme de cassis and cherry along with cigar wrapper, licorice and graphite. This is what you’d expect from a great wine and a Napa classic, I am terribly impressed with the 2005, a vintage that was pretty tannin filled and awkward on release, this wine has really come together and gives plenty of pleasure and style, drink from 2014 to 2025, fantastic stuff from a California legend.
($145-185 Est.) 95 Points, grapelive